Thirsty? How About A Brees, Waltrip or K-Cho? 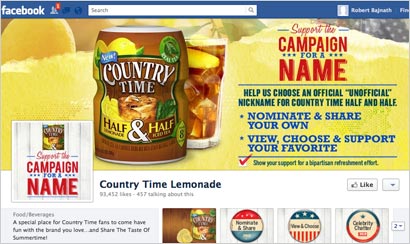 Here’s a marketing dilemma: You have a new product that’s known colloquially as the name of a prominent celebrity. What’s worse, a competitor already has a licensing deal with said celebrity to market a similar product, using his name and image on packaging. It’s the prime selling season for your product. What do you do?

If you’re Country Time Lemonade (and the new product is a half lemonade/half iced tea drink mix, aka an Arnold Palmer), you enlist a handful of celebrities to spend the summer campaigning to change the nickname to something else.

“We’re purposely being a little tongue-in-cheek,” Brett Hartmann, brand manager for Kraft-owned Country Time, tells Marketing Daily, noting that Palmer has a licensing deal with AriZona Beverage Company. “We thought it would be fun to enlist some other big name celebrities to see if we can come up with a new nickname.”

Through a social media effort, the brand has recruited Drew Brees, Kristen Chenoweth and Michael Waltrip to come up with a new nickname for the beverage made from the new drink mix. (Non-celebrity fans can also make their own nominations through Country Time’s Facebook page.) The key to the contest, however, will be to lobby for the most popular name, a practice both celebrities and consumers will be encouraged to continue throughout the summer (coinciding, not coincidentally, with the presidential election, Hartmann notes).

The lobbying and mud-slinging has already begun. A tongue-in-cheek video posted on the brand’s Facebook page shows the three celebrities campaigning for their names to be the designated nickname for the new drink. Imagery in the video includes billboards of Waltrip declaring, “It’s Tea time” and a flyer for Brees encouraging people to “Occupy Pitchers.” “I respect Mr. Waltrip as an athlete,” Brees says at one point in the commercial. “He’s driving fast, but he’s just going around in circles.” The celebrities are intercut with “man on the street” interviews of people who express either a preference for lemonade or iced tea.

In all, Country Time will release five videos throughout the summer with the celebrities outlining their positions for the new drink nicknames. A fourth, surprise celebrity will join the campaign in July. “We’ve got a lot of content that will have the celebrities going back and forth among one another,” Hartmann says. “They each have their own platforms of what they stand for and what they support.”

Throughout the summer, consumers will be encouraged to participate in the social media effort, campaigning for their favorite celebrity suggestions. The most ardent fans will be named “Campaign Manager” and be eligible for a chance to win a personal experience with their favorite candidate.

The contest is scheduled to conclude on Labor Day, with the winning contestant declaring victory in a video posted on the brand’s Facebook page. That will be followed by a limited edition package in stores featuring the winning nickname. The company is not planning a permanent rebranding or licensing as AriZona has done with Palmer, Hartmann says.