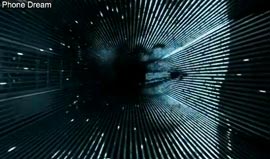 Moviegoers are familiar with the on-screen admonition to turn off their cell phones before the lights dim.  Whether it’s heeded is another matter. Now Sprint is giving audiences an added incentive to shut off their devices through a new in-cinema promotion that allows them to receive a personalized dream sequence on their phones after a movie.

Created by “Team Sprint," the wireless carrier’s brand agency Digitas and creative network Leo Burnett, the campaign centers on a 40-second PSA spot that directs audience members to text the word “dream” to 60602 before turning off their phones. But it’s no low-budget PSA.

The novel Sprint effort kicked off in mid-May and will run across the more than 18,000 screens of National CineMedia in-theater media network until the end of 2012. The carrier has previously run wireless courtesy PSA campaigns, as well as other in-theater marketing initiatives including setting up lobby kiosks for scanning codes to get concession coupons.

The ad features a series of arresting visual effects, combined with sounds and images from a young mobile user’s phone interactions asking: “When you shut your phone off, does it dream?” When a movie ends, those that texted to 60602 receive a message asking them to opt-in via Facebook. After opting-in, users get 15-second video clip capturing what the device has been “dreaming” while it was ”sleeping.”

The customized clip is developed over a two-hour period and taps into a user’s publicly available information on Facebook, including photos and specified interests to create their own mini dream video. People can then share the dream clip with others via Facebook, Twitter and other social networks.

"Our mission was to create something that would take full advantage of the power and scale of a cinematic experience," said Michael Boychuk, SVP, executive creative director, Leo Burnett, in the announcement. "We challenged ourselves to shoot Dream without any computer-generated graphics and instead used a full-size art installation."

Along with the new PSA spot, Sprint has also posted on YouTube a behind-the-scenes video about the making of the eye-catching ad. Publicis created Team Sprint late last year in connection with Sprint dropping Goodby Silverstein & Partners as its main creative agency in favor of the Publicis agencies.