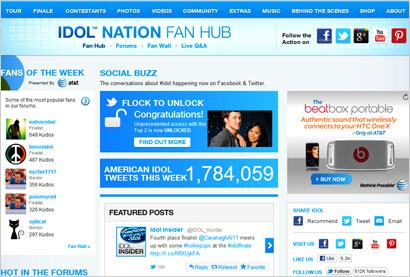 The "American Idol" TV live season finale generated more than 1 million social comments, contributing to the 5.9 million for the season. A Flock to Unlock campaign on Twitter in real-time pushed the numbers higher compared with prior shows.

While Facebook changed the definition of community for TV viewers, Twitter provides the ability for live shows to interact with a television audience in real-time through tweets on mobile devices, according to Don Wilcox, Fox's vice president and general manager of branded entertainment.

"American Idol" created the Flock to Unlock campaign on the Fan Hub site, where TV viewers tweeted to unlock sponsored content from brands, such as Coca-Cola. Ryan Seacrest, the show's host, mentioned the content live on air, which sent fans flocking to Twitter.

Mass Relevance's technology powered and counted the stream of Twitter data that unlocked the behind-the-scenes footage on the Idol Nation Fan Hub site. Each tweet brought the community one step closer to unlocking the content for all.

During the finale of season 11, "American Idol" Twitter buzz hit a peak of 23,876 tweets per minute at 10:03, just as the show wrapped up. A total volume of 599,174 went through the Mass Relevance platform from 8:00 to 10:07 EST. The tweets did not end with the season 11 show. During the 10 minutes after the show concluded, the platform counted about 9,500 tweets per minute. That number declined to roughly 4,000 tweets per minute during the hour after the show ended. Once on the site, the shows' loyal fans hung out on the site's Fan Wall and Fan Hub pages, spending seven times the amount on-site as the average visitor.

Although social campaigns are difficult to measure, "American Idol" relies on support from Bluefin Labs. While it depends on the platform, monitoring tweets compared with the competition, trending topics and words that relay emotion remain key performance indicators (KPI) on Twitter for "Idol," Wilcox said. "There were a few points in the season where we had nice organic integration that resonated with fans and got them sharing opinions, which created trending topics," he said. "The more trending topics you get, you can argue, the more successful it becomes."

Wilcox pointed to a mention on air by Seacrest during a live show for fans to tweet the name of their favorite music idol using a specific hashtag. The request triggered a Twitter trending topic.