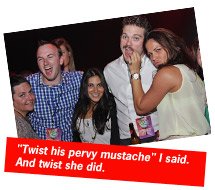 When Glenn DeKraker, COREMedia Systems CEO, floated -- correction -- effervesced the idea to me of shooting the company’s 20th anniversary event, Response Responsibility, I thought two things: “Crap sandwiches, I’ll have moved to Florida by then”; and “How can I make this work?”

Glenn solved it for me by whisking me from Miami in what I like to call “a bounce house in the sky” (what others call a plane). The next thing I thought, this would be perfect for Just An Online Minute, my old column that I love and miss! So hello, here I am, on assignment from CoreMedia. I’ve missed you.

Last Thursday NYC had on its South Florida pants. It poured on and off, it was so muggy the rats couldn’t control their frizz. I arrived at Hammerstein Ballroom early and could feel the sizzle of the production crew readying the last-minute details. The entryway was flanked with over a dozen iPad-toting check-in staffers – a GREAT idea considering the amount of people they were expecting. 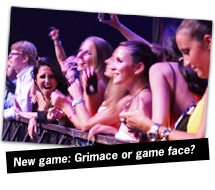 I had never seen Hammerstein Ballroom before, so… clean. Soft white settees were placed in spots where concert-goers would usually stand and slosh plastic-cupped beers on each other. Two secondary raised seating sections were placed to the left and right of the stage, adorned with the same soft white seating, cocktail tables, and candles. I made my initial rounds and was happy to find a cup of mints. I popped one into my mouth. It was an earplug.

The skies opened at arrival time, and with the liquid deluge came a flood of people. These guests were punctual. And wet. As they swept into the first cocktail area, food dangled and slid by on poles, from hangers (pizza torture devices!) and some even floated. Yes, there were burger balloons. Little slider concoctions floated by guests on a tray dangling from fat purple balloons. Guests learned quickly where the food emerged, and the poor Pinch waitstaff was engulfed by hungry and charitable direct-response marketers and clients like Reese’s Pieces on a fire ant hill. 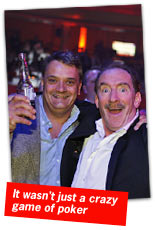 Champagne corks popping punctuated the music being spun loudly, but not too loudly, by The Knocks, wine clumsily knocked from trays was quickly replaced and quaffed, and the sssst of bottles being lifted from icy cold frothy stuff wove through the happy crowd all set for the party, which doubled as a benefit to celebrate the Good Tidings Foundation, a children’s charity that supports arts, education, athletics and dreams for youth from communities in need. Donation stations were set up strategically by the open bars, and a silent auction featured all kinds of goodies including an autographed jersey from C.C. Sabathia, a one-week stay in a private villa in La Quinta, Calif., AND a never-played Black Beauty Gibson guitar (which was eventually won by Roman Alemania, from BrooksRoman).

Glenn DeKraker is a towering man who rose above the partiers throughout the night.  Don’t be mistaken, his stature is about as menacing as a bunny made out of baby panda sneezes. Everyone I encountered at the event -- and there were hundreds -- EVERYONE praised not only DeKraker, but CoreMedia itself as a conglomerate of just good people.  And before O.A.R. took the stage, Glenn thanked all of the good people who made the event a reality and encouraged guests to support Good Tidings,. 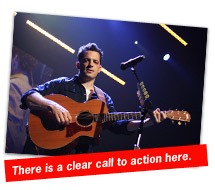 Now, I’ve always been neutral about O.A.R. I shrugged them off as a fratty quasi-hippie band, but man did that crow taste good that night. They bounced and jangled, backed by a trumpet, sax, and trombone, lathering the guests up into a frenzy (an iPhone-dropping frenzy -- I had to rescue phones dangled by ove excited fans over the stage barrier). It’s the kind of music that pumps your heart with happiness. The group barreled through “Sunday Bloody Sunday” and squeezed the tear ducts by introducing a choir to the mix. The energy was incredible and judging by the smashed plastic champagne flutes, wine cups, and beer bottles left rolling underfoot at the close of O.A.R.’s set, I wasn’t the only one who felt it.

Speaking of feeling it, I’m guessing there were a slew of SLOW-response media types the day after. The night wrapped up with more beats from The Knocks and, based on the flurry of dancing, the three-day weekend may have been just what the doctor ordered. 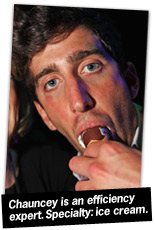 Seen enjoying the event were Bob Yallen of InterMedia, Nancy Lazkani of Icon Media Direct, Tom Turner of ActiveCares/Active Media, Wendy Arnon of Omnicom, Joe Shain of Zenith, Aaron McNally and Morgan Chaney from Google, Terry Kent from Kantar, Scott Paternoster from Chief Media, Chris Gilbertie of Gotham Direct, Maria Kennedy from Discovery, Amy Leifer from DirectTV, Renee Ingenito from Comcast, Gene Turner from Horizon,  Scott Kowalchek of Direct Avenue and all of or friends at A. Eicoff & Company, Lindsay Schaubman, COREMedia’s director of client services (DeKraker applauded her gratefully for all of her help pulling the event together while PREGNANT WITH TWINS), Jim Paull, COREMedia’s COO (not pregnant with twins), and so many more.

The photos should be posted to the COREMedia Facebook page at some point, so check back if they’re not up yet.

parties
1 comment about "COREMedia Puts On Its Crazy Game of Poker Face To Celebrate 20 Years".
Check to receive email when comments are posted.
Next story loading