Take It Inside!: Indoors Is Next Mobile Mapping Battleground 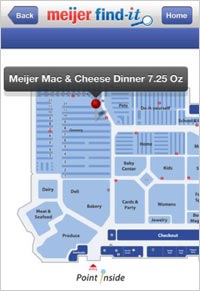 All of those wonderful swooping 3D flybys that Apple showed off for its upcoming Google Maps replacement in iOS 6 were cute enough. And yes, it is on between the two companies over maps -- a search interface that is super-powered on mobile platforms. But the next war is when that flying camera view comes in the window.

In a research brief from IMS this week, analyst Alex West noted that both Google and Microsoft were already actively mapping indoor spaces and that firms like Aisle 411, Micello and Point Inside were building databases of indoor maps. Look for some friction from venues as retailers and malls discover that the simple interior maps of their location suddenly have a new value to the big dogs.

In fact, a complex new supply chain may evolve as maps go indoors and become app-ified. “There are a few revenue models that can be applied for maps,” West told me. Aside from simply licensing the map to be used by app developers via an API -- much like how Google Maps currently works -- there is the option of licensing the raw indoor map data itself, giving a third party the ability to create the map in its own style.”

For the smaller players in the space, developing just the map data is not enough of a business -- and so they have been moving to wrap service and features around the maps for clients. “This is thought to be the only way for a small map vendor to successfully monetize the market,” he says. But the model requires some kinds of advertising and marketing to fund the license.

West points to mapping data company Point Inside and its work with Meijer to create a Find-It app that has couponing and item ordering features as well as in-store tools for finding products on specific shelves. The app even allows you to find the restrooms in a store and the bottle return bin.

West believes that Google, Microsoft and Nokia and Apple ultimately will dominate the indoor mapping market. They will gobble up some of the startups in the category to gain advantage over one another, but there may still be a tier of independents that will be there to serve the retailers who will not want to work with (or for) the big operating systems and search providers.

Not a minute too soon. Have you tried to find anything in Target or Home Depot? Now here is where we need turn-by-turn directions from our phones.

Siri – Where are the Honey Roasted Planters Cashews that are on sale here?

“Turn left at the Metamucil after you pick up two canisters.”

Siri, I don’t need any Metamucil.

“Don’t argue with me, dumbass. Yes, you do. Remember, I go with you everywhere.”