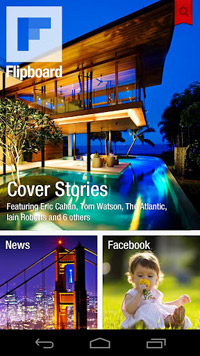 The flagship among iOS content aggregators Flipboard finally makes its way to the Android operating system this week, only two years after first launching on the iPad in mid-2010 and six months after arrival on the iPhone. In this case, however, the company is not aiming first for the larger screen but limiting the “social magazine’s” design to the smartphone format. Flipboard for Android is available now in the Google Play app market and pretty much ports the iPhone design. Unlike the original tablet version, this iteration generally flips the user through a collection of topical stories with illustration one item at a time.

The Flipboard algorithms are culled from one’s social network stories within select topical categories that are being favored by your social graph. With the Android release, Flipboard has also updated its reach of social networks to include Google+ and YouTube accounts. Users can add either account to their feeds and also perform “+1” recommendations with a tap or share an item in their Google+ feed. Flipboard is also releasing local versions for its major markets, including the U.S., Japan, France, China.

While Flipboard has published its app into both the Nook and Amazon Kindle Fire app stores, the apps use the smartphone interface rather than the full-sized and more feature-rich aspects of the iPad version. The company tells GigaOm that it is not yet planning a tablet-specific version for the Android tablet. In our use the Kindle Fire version of the app is identical to the Android phone version, and even relies on vertical flipping gestures more suited to a one-handed device than a 7-inch tablet. The decision not to reiterate the iPad version of the popular app for Android tablet devices is another indication of limited confidence among developers in the viability of the Google OS on larger screens.

According to an April survey by comScore, Amazon’s Kindle Fire accounted for more than half (54.4%) of the entire Android tablet market. Nevertheless, IDC recently found Kindle Fire sales dwindling this year after a fast start in holiday 2011. The iPad is expected to own 68% of the tablet market by year’s end.

Flipboard boasts over 2,000 featured publishing partners and a direct relationship with 80 “platinum” partners who run their content into the app via specially formatted “Flipboard Pages.” According to a recent presentation from the company at the min Digital Media Summit, the content in Flipboard produces over 10 million social media shares a month, including 6 million Facebook “Likes” and 2 million retweets.