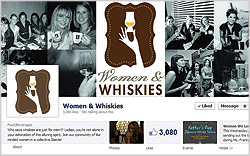 Women’s drinking habits have been shifting, opening new opportunities not just for vodka marketers, but increasingly for marketers of brown spirits.

The opportunity is large, as women not only make about 70% of the alcohol-purchasing decisions for at-home consumption, but have been consuming more drinks out-of-home as well. Restaurant alcohol servings to women increased 9% in 2009 and 3% in 2010, even as servings to men decreased by 4% and 6%, respectively, per data from The NPD Group cited by the Los Angeles Times.

This has not been lost on Campari America, part of Gruppo Campari, whose large portfolio includes not only Skyy vodka and Cabo Wabo and Espolón tequilas, but Wild Turkey, Russell’s Reserve, several distinguished single-malt scotches (including Bowmore Islay, Glen Garioch and GlenGrant), and Japanese single-malt whiskies The Hakushu and The Yamazaki.

Randal Stewart, PR manager for whiskies at Campari America, attributes women’s growing interest in scotch, bourbon, rye and other brown spirits at least in part to the “cocktail culture” revival of recent years, which spawned renewed popularity for classic drinks like whiskey sours and Manhattans and led to many new whiskey-based cocktail innovations.

Many women had long been uncomfortable ordering brown spirits -- traditionally because of lingering perceptions that these are “male” drinks, but in recent years because of discomfort about lack of knowledge of the finer points, Stewart says.

But by late 2009, Stewart was not only seeing significantly more women in attendance at Campari America and other whiskey events, but hearing a growing number of valid, “whiskey 101” questions from them -- making it clear that women needed to be “empowered” on the whiskey education front, she says.

Women & Whiskies, which takes a “community” approach, offers live events that start with cocktail sampling/socializing and move onto providing information and answering questions in an enjoyable, non-threatening atmosphere (the servers and DJ’s, as well as mixologists, are all women).

A dedicated Facebook page similarly enables women to interact and share their likes and dislikes, recommendations and questions, as well as offering profiles of female whiskey fans and female mixologists.

The program started with large-ish, 100-plus-attendee events. But this year, while there will be two of these larger, “signature” events, the focus is on smaller, more intimate gatherings in seven key U.S. markets (two events in each market), reports Stewart. This is partly reflective of the increasingly sophisticated, in-depth questions being asked by attendees. “We don’t trivialize -- we help women get answers to their questions about whisky ageing, regions of origin, subtle taste differences like peaty versus smoky, and so forth,” she says.

Women & Whiskies has up to this point relied nearly entirely on word of mouth generated by the events, PR efforts by Benson Marketing Group, and the Facebook page. Because the women who participate in the Facebook page are very active, the page has seen nearly totally “organic” growth, she says. (Since the start of this year, its “likes” have grown 50%, from about 2,000 to more than 3,000 currently.)

Recently, Campari America has tried its first paid advertising for the program, on Facebook, which generated about 300 new “likes” within its first week, according to Stewart.

For 2013, it’s planning to take W&W to the next level, including considering investing in more paid advertising, as well as establishing a dedicated site, she says.

Stewart says that Campari America was the first spirits company to take on the mission of empowering/educating women about brown spirits. However, according to press reports, it’s no longer alone: Heather Greene, brand ambassador for Glenfiddich, imported by William Grant & Sons, launched a “Women & Whiskey” campaign, also featuring events, in late 2011.

Gruppo Campari/Campari America also jumped on the brown-spirits opportunities in females and younger adults early on with its product offerings -- launching Wild Turkey American Honey (a liqueur based on WT bourbon), for example, in 2007.

Since then, competitors have launched a growing number of products aimed at those two audiences. These include Beam Inc.’s Red Stag flavor-infused varieties, and Brown-Forman’s Jack Daniel’s Tennessee Honey liqueur.