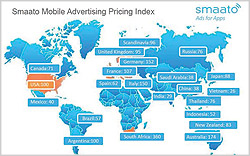 The company said ad volume increased 26% in the quarter, but pricing on average was 30% higher in the fourth quarter because of higher advertiser demand during the holiday shopping season.

The Smaato index represents a percentage of the effective cost-per-click (eCPC) average per country across 80 mobile ad networks and uses the U.S. as a baseline of 100 for the overall index.

The index serves as a global ”rate card,” helping advertisers better plan and roll out campaigns across different markets. App developers benefit by pinpointing countries or regions where they can drive the highest average revenue per user.

The new index for the first quarter shows wide differences among regions worldwide. Western Europe has a score of 117, while the Middle East comes in at 36, underscoring the difference between mobile advertising in advanced and emerging areas. Central America represents an even bigger discount, with eCPCs indexing 70% less than in the U.S.

“The Smaato Index indicates that app developers can now make more money in Western Europe than in the U.S. While for advertisers, the U.S. is now an incredible bargain, as they can reach 30% of the U.S. market through smartphones at 30% lower cost than in Western Europe,” stated Smaato CEO Ragner Kruse in a release Thursday.

The company noted that users in Italy, with a score of 150, have a high affinity for mobile advertising in both apps and the mobile Web. At the same time, Scandinavia’s high smartphone penetration and low index score (96) make it an attractive but lower-cost option for advertisers.

The report also highlighted the huge mobile markets represented by China and India, with index scores of 38 and 29, respectively. It pointed out that the two countries combined now have as many smartphones, as users in China especially have become savvy mobile shoppers searching for products and deals.