The Enduring, Predictable, Incredible Lameness Of The Branded Game 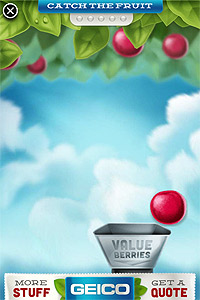 In a decade and a half of covering digital media, I have played (literally) with hundreds of corporate logos and mascots. And I can’t recall a branded digital game that was worth playing more than a few minutes. There is something comforting about the predictability of all that.

It is regrettable, nevertheless, that the misguided attempts to make brands fun are being revived in the “game-ification” trend. Rewards, points, competitive spirit are all good enough design elements to add to apps or campaigns if done in small measure. But the full-on attempt to make ads into interactive games almost always goes awry.

Oddly enough, two insurance brands -- Progressive and Geico -- have recently run iAd programs that use bad gaming as a way to communicate brand messages. The Geico ad riffs on the car insurance taste test ads on TV by letting you make your own “blend.” This involves catching fruit falling from trees, shooting them into an extractor and then bottling them into personalized flavors. Did I just make that sound vaguely fun? Sorry. It isn’t. The challenges are too simple and the game sensitivity is not always up to the task at hand to feel polished. Worse, there is no really interesting payoff.

The Progressive game ad is much more aesthetically appealing, with Powerpuff Girl anime stylings, Including spokesperson Flo. You toss Progressive cards at Ninjas and do a few other little tap antics -- again, to no good effect. And the game is not engaging enough to matter. The stages are punctuated by messaging about Progressive’s advantages, so the feeling of being trapped in an ad is everpresent.

Obviously, where all of these branded games go wrong is that they aren’t games at all. They are shadows of games. They are faux games that are just props for messaging. And ultimately the base cynicism of the approach has to come through to the player. The game wasn’t fun, but it kept you engaged longer than any ad would. That is the metric of success for this sort of stuff -- time spent. To any sentient user they feel like tricks, not games.

apps, branding, gaming, mobile
1 comment about "The Enduring, Predictable, Incredible Lameness Of The Branded Game ".
Check to receive email when comments are posted.
Next story loading