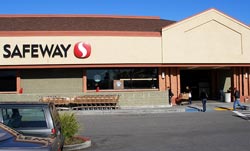 In its just-released annual ranking of the biggest retailers, STORES Magazine reports that grocery chains are regaining their edge. Wal-Mart retains its top spot, of course. (It’s bigger than the next four largest retailers combined.) Kroger maintains its No. 2 spot. But Harris Teeter Supermarkets, new to the list this year, vaults into the No. 80 spot, and Costco jumps ahead to No. 5, pushing the Home Depot down to No. 6. And Safeway, which has missed the top 10 in the last five years, is back on the list.

“When it comes to grocery retailers, fundamental shifts in how their customers shop, primarily because of the ‘need versus want’ argument, have changed which companies might excel faster than others,” says Susan Reda, editor, STORES media, in its release of the new ranking.  (Published by the National Retail Federation, the magazine bases its list on 2011 U.S. sales, tracked by Kantar Retail.)

The magazine attributes Safeway’s comeback, with sales topping $36 billion on growth of 5.6%, to “new programs like its mobile-driven “Just For You” platform, which offers its customers a personalized digital shopping experience.”

Other grocers gaining ground include Roundy’s Supermarkets, No. 89, making the list for the first time, and grocery chains H.E.B. (No. 26), Whole Foods Markets (No. 37), Aldi (No. 40) and Wegman’s (No. 65) all posting  double-digit sales gains for the year.

And while Amazon, ranked No. 15, is not yet in the top 10, the trade magazine predicts that the online retailer, which grew 42.5% in U.S. sales last year, will crack the top 10 next year. Apple Stores/iTunes was also a major gainer, with a 36.9% increase pushing it to No. 21.