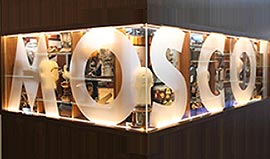 Mom-and-pop operations, like small towns, have all but vanished into the maw of corporate chains, brands and strip malls. No surprise that multi-generational retail businesses that are actually thriving make big news. Russ & Daughters, the famed delicatessen on New York's Lower East Side (LES) was the subject of a documentary on PBS. A documentary about a deli!

The message isn't lost on another LES original, eyewear maker Moscot, which has made frames for around a century and does so now under its Moscot Originals, Spirit, and Sun Collections labels. The company will soon launch a campaign touting both its longevity as a family business and the latest addition to its Originals line by spotlighting other LES originals, including Russ & Daughters owner Niki Russ Federman.

To make the point that Moscot is a fourth-generation shop at a time when, per the company, less than 3% of all family businesses operate into the fourth generation, the company will tout Originals by dispensing with the usual models-in-glasses approach and feature instead current LES scions. For the "Living History" campaign, Moscot Originals frames will be seen on the nose-bridges of Billy Leroy, curator of the Lower East Side for almost 30 years and owner of Billy's Antiques and Props; Mark Miller of the LES Business Improvement District and promoter of the City's Low Line Park; Marty Katz, fourth generation owner of M. Katz & Son's Furniture; Aaron Gross, fifth-generation owner operator of The Streit's Matzo Factory; Marilyn Blumengold, a Moscot employee since 1970, Theodora Moscot, third-generation Moscot matriarch, and Federman from Russ & Daughters.

The campaign launches on Oct. 4 along with the release of seven Moscot Original frames. Bahareh Ebrahimzadeh, spokesperson for the firm -- which has two shops in Manhattan, one in Brooklyn, a factory on the LES, operations in China and distribution worldwide -- says the company does it all in-house with a five-person marketing team.

But she says the company, which started from a pushcart (Moscot brand imagery incorporates a silhouette of a pushcart) and is based on Orchard Street at Delancey, doesn't have to do that much on the paid-media side: Moscot gets coverage and buzz anyway, partly from its style guide, and just the quirkiness of being a fourth-generation business that is seen as retro-hip.

The company works that angle, jazzing up the vintage-hipness factor with programs like "Live from the Shop" comprising music events and boho happenings at its Orchard Street "Gallery and Music Space" under the aegis of "Moscot Music." And the company's Web site has a tab showing famous folk -- Tim Burton, Lady GaGa, and Jeff Goldblum among them, wearing Moscots.

"People pick up on what we are up to," she says. "Because our collections change, to stay true what we are doing, we needed a style guide, and it has become popular." The company also changes the appearance of it stores based in the lines it is launching, per Ebrahimzadeh. A recent launch featured its employees and the company got media coverage last year when it launched its first metal frames, in a photo series using well-known metal-rock musicians as models. None, however, are shown enjoying a Cel-Ray and a bagel with whitefish.