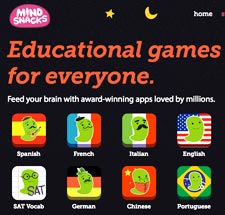 With Zynga’s stock in the gutter, some are questioning the strength of social and mobile gaming.

Launched in 2010, MindSnacks has already racked up roughly 4 million downloads.

In an age of short attention spans and ceaseless digital distractions, the start-up attributes its success to a “bite-sized” approach to content consumption.

“Our games make it easy to consume a few minutes’ worth of learning on the go,” said Jesse Pickard, CEO of MindSnacks. “This bite-sized approach makes learning easily digestible for people of all ages.”

Each MindSnacks app features six mini-games built around different skills. Combined with what Pickard calls an “adaptive curricular algorithm,” its games are easy to pick up.

With its new investment, MindSnacks plans to expand its subject offerings by hiring more engineers and designers.

Its current roster of 14 iPhone apps include language-specific subjects, such as Spanish, Mandarin and SAT Vocabulary. Forthcoming titles will cover geography and math.

Regarding MindSnacks, Sequoia partner Bryan Schreier said: “We see enormous potential in their mission to make learning any subject easier.”

By the end of the year, the number of U.S. social gamers will approach 76.5 million, according to eMarketer. Social networks such as Facebook remain a popular platform for social games, but the growth of stand-alone mobile applications gives game makers more control over their destinies.