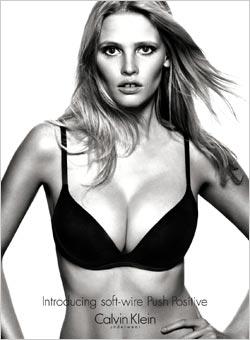 In a big switch for Calvin Klein Underwear, it says it will launch its new Push Positive bra line via digital channels, in a splashy effort featuring Dutch supermodel Lara Stone.

The black-and-white video, shot by Steven Klein, is expected to get 575 million impressions, and will begin appearing on YouTube next month. (The company intends to break it on its social media sites before then.) Overall, Calvin Klein says digital channels will account for 70% of the global media mix, and include an interactive Facebook application which allows users to share personalized images. There will also be a hashtag sweepstakes on Twitter as well as Weibo.

The campaign will run in the U.S., Canada, Mexico, the U.K., Germany, Spain, Hong Kong, Korea, Singapore, Taiwan and Philippines, with additional support in Asia through placements on Youku, Yahoo and Nate.

The brand, which is a division of The Warnaco Group, will also use designated in-store stations, arming sales associated with iPads loaded with a special app to aid in fitting. And of course, in what has become a given for Calvin Klein’s undies, there will be billboards, with the first appearing in New York’s SoHo this week.

Billed it as “the perfect modern bra,” it uses soft-wire flexibility and microfiber, and will be offered in black, nude and a variety of colors.

Business Insider, citing research from Citi, reports that Calvin Klein has less than a 1% share of the women’s intimates and socks/hosiery sales, as is true with most brands sold primarily in department stores. (Mass brands dominate the market, including Hanes with 6.5% and Fruit of the Loom with 3%. Overall, bras account for some 45.8% of dollar sales in the intimate business.

Business Insider, citing research from Citi, reports that the women's intimates and socks/hosiery market grew to $14 billion in 2011, from $13 billion in 2010, including a 7% gain in intimates. While Calvin Klein has less than a 1% share of the total market, it is among the strongest of brands sold primarily in department stores. (Mass brands dominate the market, including Hanes, with a 6.5% share, and Fruit of the Loom with 3%, it reports.) Overall, bras account for some 45.8% of all dollar sales in the intimate business.

Stone is currently ranked No. 1 in the world by Models.com, and has appeared in multiple global ad campaigns for the brand since Fall 2010, including clothes, jewelry and fragrances.