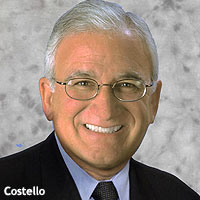 John Costello has been chief global marketing and innovation officer for Dunkin’ Brands (Dunkin’ Donuts and Baskin-Robbins) since 2009, having previously served as EVP of merchandising and marketing for The Home Depot, senior EVP of Sears, chief global marketing officer of Yahoo, and president/COO of Nielsen Marketing Research U.S., among other positions.

As Dunkin’ Donuts launched its first mobile app for iPhone, iPod Touch and Android smartphones -- which enables paying through a virtual DD card via barcode scan, sending Dunkin’ gifts by email, text or Facebook, and linking to Dunkin’s social media communities, among other features -- Costello stopped to talk with Marketing Daily about this initiative and Dunkin’ Brands’ broader marketing strategy. Here are some (lightly edited) highlights.

Q:  Why do you consider this payment/gifting mobile app so important?

A:  Through our dialogue with our fans via Facebook, Twitter and our Web site, it became clear that they wanted a mobile app -- the convenience and speed of being able to use their phones to pay. So we put together a cross-functional team to develop a state-of-the-art app that could provide the desired features. We also view the app as the beginning of a long journey to build even deeper relationships with our fans. Importantly, it also provides a real benefit for our franchisees -- it lets them service their guests even faster, which is particularly key during the busy morning hours.

Q: Clearly, Dunkin’ is pushing into mobile and social media. How is your marketing strategy for 2012 and 2013 changing?

A: Dunkin’ is fortunate, because we’re still getting a strong ROI on traditional media like television, radio, outdoor and in-store POP. We’re somewhat different than some other marketers who shifted into interactive marketing because it no longer works. We conduct fairly sophisticated analyses across all media, and then adjust our plans based on that ROI. So while interactive, mobile and social are growing at a faster rate than traditional marketing tools, they’re earning their way into the marketing plan through the ROI that they provide. You won’t see a wholesale shift to those media. Traditional media still represent over half of our total marketing budget.

From a strategic standpoint, we’re very focused on helping our franchisees grow their businesses' profitability. That means continuing to build our strength in the morning, with beverages, bakery and breakfast sandwiches, but also providing additional reasons for guests to visit us all day long. The latter is reflected in our expansion of our iced coffees and iced teas and Coolatas, and the launch of our new bakery sandwich line. Our franchisees are our secret weapon, because these local entrepreneurs know their markets better than anyone, and are passionate about delivering the best service and offerings to their guests. Like politics, all retail is local.

Q: Most marketers don’t seem to think it’s so easy to measure ROI meaningfully, at least when it comes to social media.

A: Being a retailer with a strong customer base -- having the benefit of the actual sales data at the local level -- does make it easier to measure ROI than if you’re a consumer products company. But you’re right -- it’s easier to measure ROI for some aspects of marketing than others. Direct marketing is probably easiest, whereas it does become more difficult in the social area. We’re looking at level of engagement with our fans in social media, as well as the impact on various product lines.

Q: So you’re able to correlate social activity with sales?

A: Yes, although I can’t discuss too many specifics for proprietary reasons. But in addition to saying that we do analyze all aspects of the marketing plan, and that some aspects are more easily quantifiable than others, I would note that to my mind, analytics shouldn’t replace judgment. We supplement analysis with judgment. That’s why our growth in interactive and social is a very consistent, measured growth rather than the dramatic swings that some other marketers seem to be considering.

A: Yes, we’ve done some -- and I think our mobile app provides a platform to do even more location-based marketing in the future. For example, we’ve done some efforts with Foursquare, and we’ve been pleased with our relationship and our testing so far. We’ve not offered mobile coupons on a national level, but several regional markets have leveraged coupons and offers through social media and Foursquare. For example, over 500 of our Philadelphia metro restaurants offered a free medium hot or iced coffee on a guest’s fifth Foursquare check-in, which enabled us to measure the impact of a free coffee offer on frequency of check-ins via Foursquare in those restaurants. You’ll definitely see a ramp-up in our testing and use of social media.

Q: Dunkin’ was integrated into the launch of The Sims Social Facebook game. How’s that working, and what other platforms are you experimenting with?

A: The Sims Social Facebook game integration has been very successful. People can gift virtual Dunkin’ products, and if you like us on Facebook, we give you free virtual gifts like a lawn chair to sit in while you drink your Dunkin’ coffee. In May, we also tied in with the “Men in Black” movie with a Black Cocoa Crème Iced Coffee and a Dunkin’ game where you could feed the aliens coffee and donuts. That generated over 100,000 downloads of the game.

Q: You also recently used Twitter for the first time as the initial vehicle for a product launch, to pre-promote your new Mocha K-Cup packs. Fans could earn chances to win a pack prior to the products’ arrival in Dunkin’ stores by signing up to follow Dunkin’ on Twitter, using a #MochaMaDDness hashtag and answering a question. Do you expect to use Twitter, etc. more for product launches?

A: Yes, we do plan to use social media more in the future for both product and other launch initiatives. We’re using Facebook and Twitter to launch our new mobile app, as well as being listed in the Apple App Store and Google Play and the Dunkin’ Web site.

Q: Are you planning to ramp up food and beverage launches?

A: Our guests like a combination of old favorites and trying new items. So we’ll continue to expand our core menu -- coffee, bakery, breakfast sandwiches -- while also offering limited-time offers on food and beverages to let them experience new flavors throughout the day. For example, this past spring, we offered new Dunkin Burritos in veggie and steak varieties.

Q: Early this year, Dunkin’ launched an all-Spanish-language, multiplatform campaign, featuring Hispanic fans’ comments on the “America Runs on Dunkin’” theme. How were the results? Are you expanding Hispanic marketing?

A: We’re pleased with our Hispanic marketing so far, and continue to expand those efforts as a percentage of total. For example, we’ve developed a Hispanic version of our successful ‘What Are You Drinking?’ campaign, as well as Spanish-language POP in select markets. We are also using Spanish-language Facebook and social media to deepen our relationships with our Hispanic customers. And we continue to offer products for Hispanic customers, like our Cuban Flatbread Sandwich and Café con Leche, in select markets.

Q: What would you say are your biggest marketing challenges?

A: Our #1 goal is to sustain the momentum we’ve seen over the past several years. We’re fortunate to have a very strong base of franchisees throughout the United States and partners throughout the world, so we’re very focused on the core strategies across marketing, operations, product development and store development that have been working for us.

Q: How much do U.S. and international marketing strategies differ?

A: The fundamental brand and marketing principles are similar across the globe, but the marketing tactics vary by country, based on number of stores and length of time we’ve been in the country. For example, in South Korea we have over 900 restaurants and have been there over 20 years; in contrast, we’ve now opened our first three restaurants in New Delhi, India. In terms of products, we offer a combination of global favorites, like Dunkin’ original coffee and some of the classic donuts that are favorites in a market, but we also personalize some products for local tastes. For example, in Asian markets, you may see our glazed donut, but also some savory products, like donuts topped with shredded pork or chicken.

Q: Time doesn’t allow for getting into detail on Baskin-Robbins, which has in recent times experienced some challenges. Briefly, how would you summarize the marketing strategy for B-R -- is it similar to Dunkin’s?

A: Regarding the performance of Baskin-Robbins and Dunkin’ Brands as a whole, I think it makes most sense to refer people to our second-quarter 2012 earnings release and the Q&A discussion during our conference call. [Editor’s note: See Dunkin’ Brands’ Webcast link or Seeking Alpha’s transcript link.]

And yes, with Baskin-Robbins, we’re also focusing on both traditional and new media, with new media earning its way into the budget via ROI. We’re using television, print, interactive and other media, based on ROI analyses. One difference is that Baskin-Robbins’ marketing is more regionally focused due to its footprint, which is more heavily concentrated in the Western U.S.