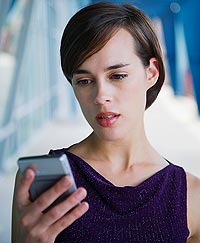 A large majority of smartphone owners use their devices to consume digital content, including media and information, according to a new survey by Frank N. Magid Associates for the Online Publishers Association, titled “A Portrait of Today’s Smartphone User." A growing number of these people have seen and responded to mobile advertising delivered to their device.

Overall, the OPA-Magid online survey of 2,540 people ages 8-64, conducted in March of this year, found that 44% of the U.S. Internet population age 8-64 owns a smartphone. Within this group, 93% said they regularly access content and information, with 59% saying they access the Internet, 58% checking email, 47% checking weather information, 31% watching video, 29% accessing local news and 24% accessing national news.

Within the group that consumes content on their smartphones, 39% (or around 36% of all smartphone users) say they have responded to mobile advertising.

Asked about their activities in the six months leading up to the survey, 15% of smartphone users who consume content on the phone have clicked on an ad, 12% have used a special offer or coupon, and the same proportion have made a purchase either on a PC or at a store after seeing a mobile ad.

Interestingly, ad response rates were higher among smartphone users who have paid for content. One out of four U.S. smartphone owners (24%) have paid for digital content, according to the OPA survey, with 22% paying for video, 21% for entertainment, 21% for books, and 19% for weather content. Within this group, 79% have taken some action after seeing an ad, with 31% clicking on an ad, 30% using a special offer or coupon, 27% making a purchase on a PC, and 24% making a purchase at a store as a result of seeing a mobile ad.

In June, the OPA released the results of a similar survey about tablet users, which also revealed relatively high engagement with advertising and brand-related content. In that survey, 29% of tablet owners said they have researched a product in the previous six months, while 23% said they clicked on an ad, 20% used a special offer or coupon and 19% visited a product Web site.