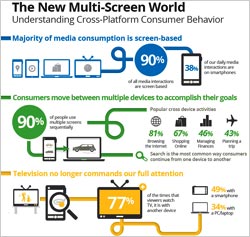 Consumers spend 4.4 hours of leisure time in front of multiple screens daily, according to a Google study. The findings released Wednesday reveal that consumers spend an average of 17 minutes per interaction on a smartphone screen compared with 30 minutes on a tablet; 39 minutes, a PC or a laptop; and 43 minutes, a television.

Google identifies two types of screen use: sequential and simultaneous. The former, more common, typically occurs over the same day. Some 98% of people move between devices in the same day to accomplish a task.

Search connects consumer experiences across screens. Some 78% of consumers simultaneously multi-task using several devices. The study reveals that 92% use PC and smartphone or TV and PC, where as 90% use the TV and smartphone, and 89% prefer TV and tablet.

Brands should start targeting ads on multiple devices simultaneously to make the most of advertising budgets. The change in consumer behavior suggests a need for brands to consider retargeting across multiple devices, as well as an attribution strategy to determine paths to conversion based on the devices that specific types of consumers might use.

Google's study suggests that 67% of shoppers move from one screen to another, taking multiple-device paths to purchase. While 65% start on a smartphone, 61% continue on a PC or laptop and 4% with a tablet.

Even before the purchase, Google's research shows that more consumers search for information about products and services across devices. Those with mobile devices search for information triggered by events, locations and physical items, but Google's study suggests that consumers search more often for things seen on TV. Respondents could choose mroe than one option when asked what prompted them to do a search.

The net number, 22%, of people said television prompted a search on smartphones compared with 17% seeing a commercial on TV, and 7% seeing a TV program. When it comes to searches on PC and laptops, TV contributed 10%, whereas TV commercials and programs each contributed 6%.

Most consumers accomplish goals through "spontaneous vs. planned search" activities. On a smartphone, 20% of searches are planned versus 80% that are spontaneous. On a PC or laptop that percentage changes to 48% and 52%, respectively.