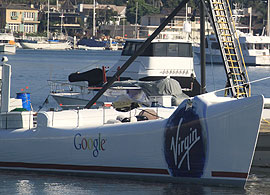 After a newspaper's PageRank dropped from seven to three in search engine query results, an employee of the news agency wrote Google's spam guru Matt Cutts to ask why. Comparing it to Amazon's recommendations, he wrote back explaining that a site's PageRank can drop by 30% to 50% if it violates Google's quality guidelines by selling links that pass PageRank.

"In particular, earlier this year on [website] we saw links labeled as sponsored that passed PageRank, such as a link like [example link]. That’s a clear violation of Google’s quality guidelines, and it’s the reason that [website]'s PageRank as well as our trust in the website has declined," Cutts wrote.

Cutts' post, a bit serendipitous, made me realize that my discussion with an employee at The Catalina Islander, the island's "hyper-local" newspaper, was not so unusual. While on Santa Catalina Island earlier this week, I walked into the office of the local newspaper in Avalon and asked whether the paper uses search engine optimization to optimize content online, and whether other companies on the island did the same to help travelers find information. The employee looked at me and said, "We're a hyper-local newspaper, so why would we do that?"

Well, I probably should have explained that it's the first step to making content searchable in engines, but instead I politely moved on to another subject. Searching on google.com with the keywords "Catalina Island news" serves up articles from a blog called Catalina Island or eCatalina.com, rather than The Catalina Islander -- the newspaper office I visited. The eCatalina site, a little shy on island news, seems to focus more on streaming video and still images.

Catalina Islander may not have a Web site, but it does support a Facebook Fan page, along with Avalon Bay News, a competing paper. Bing, unlike Google, indexes and serves up content from Facebook in the social bar down the right rail of search engine results. No sign of the Catalina news agencies on Google+, but plenty of photos taken by travelers.

The photo of the catamaran with the Google and Virgin logos plastered to the side was snapped Sunday off the coast of Newport Beach, Calif. while waiting for the Catalina Flyer to depart. Evidently, the boat began hanging out in the harbor last year, but Google has been mapping the ocean in Google Earth for years. The boat is part of Richard Branson's oceanic expedition, with the dive's recorded data uploaded to Google Earth.