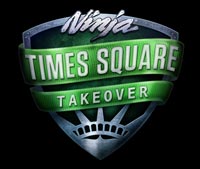 Kawasaki Motors, U.S.A. is giving Times Square some Laguna Seca Raceway flavor next week. The maker of the famed Ninja motorcycle is backing the global debut of its 2013 Ninjas with a combination motorcycle reveal and brand happening on the Great White Way. The all-day “Ninja Times Square Takeover” on Sept. 13 comprises a two-block display of Ninjas past and present on Broadway between 45th and 47th Streets. There are also events, promotional elements, celebrity appearances, music elements, giveaways, and demonstrations.

Kawasaki Motors marketing director Chris Brull tells Marketing Daily that Kawasaki has never done anything this big. "You'd have to go back to when Jimmy Carter was in office for the last time we did anything in New York City, and then it was more an internal product launch," he says. "This is not only national, but global -- it's really a 24-hour celebration."

He says the focus is both the Ninja brand, under which the company is launching new products, and the Kawasaki brand itself. "We are looking at Kawasaki to be seen as a premium high-performance brand, of which Ninja is a symbol." Brull likens the Times Square takeover to the the kind of site-specific celebratory events the NFL runs the week preceding the Super Bowl, with hall of famers, licensed products, parties, and promotions and general good times.

Among the Times Square happenings will be a stunt riding exhibition by former Speed TV host Jason Britton, motorcycle drag race instruction from Rickey Gadson, a multiple winner of national championships, and a collection of free activities for individuals and families.

Brull says that in addition to new Ninjas like the 2013 ZX-10R, 250R and 650, the lineup will include iconic Ninjas and sport bikes including the original 1984 Ninja and the 1973 Z1. The company will also give away two new Ninja motorcycles. Events will also include a phalanx of 100 Ninja riders riding down Seventh Avenue, escorted by Kawasaki execs.

The concept of the “Ninja Times Square Takeover” grew from internal discussion about how to extend the long-time brand tag, “Let the good times roll,” to both a rider and non-rider audience, says Brull, who adds that New York made sense because it's the right venue for customers, dealers and members of the press. "But ultimately, we want to make a statement about the brand itself and as we are lifting awareness of Ninja in general. What better place is there? You have people of all walks of life, but we are not looking at this as 'sell' moment."

The event will be supported by digital and social elements and in-store elements at dealerships, as well as various content tie-ins on Kawasaki's consumer site, per Brull, who adds that Kawasaki has been doubling down on sport bikes. "That's an area we feel bullish about," he says. "But off-road is important, and four wheel, and the side-by-side market are also great opportunities for us, so this doesn't mean we are minimizing them."