Microsoft To Google: 'Bing It On' 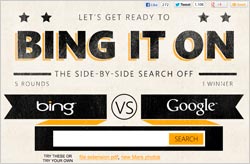 Microsoft rolled out the "Bing It On" campaign to challenge Google at search after an independent study found that people prefer Bing over Google two to one. While the campaign will span television, online and mobile, Microsoft also plans to take the fight into its retail stores.

The first 30-second TV spots -- two -- will begin running on the MTV Video Music Awards Thursday night and continue through Fox premieres such as "Ben & Kate" and "American Dad."

One of the TV spots filmed in San Francisco, "Google's backyard," explains how Googlers turned into Bingers once they took the challenge. Adam Sohn, GM of the Bing business group, said many of them were surprised that they chose Bing over Google.

Respondents tested searches on engines without branding on a choice of PC or Mac, using Internet Explorer, Firefox, Safari or Chrome browsers. The Bing It On landing page allows anyone to come and test their preference.

Sohn said people prefer Bing visually. The engine continues to grow share, which looks good for the company's financial outlook. "We have a long-term plan," he said. "We never expected to release the engine and find ourselves conquering the world three or four days later."

Although Microsoft has been slowly increasing search market share, the confusing part resides in recent data from comScore that doesn't reflect the 2:1 ratio Sohn claims. Google Sites took 66.8% of the U.S. search market in July; and Microsoft Sites, 15.7%. Yahoo, powered by Bing, came in at No. 3 with 13%.

When asked about Google's move to increase images through Google Shopping and Product Listing Ads in search results, Sohn said "there's a balance between visually compelling content and making the information on the page accessible, not too cluttered." He admits that people process images faster than text, but there are better and worse positions for images.