StubHub CMO Ray Elias: We Are Not Just A Ticket Seller 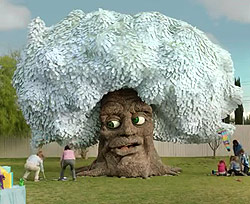 This year, online ticket seller StubHub launched its largest marketing effort to date, its Ticket Oak ad campaign, part of a bid to expand awareness and position the company not just as a ticket seller but as a multiplatform e-commerce platform.

Ads feature a giant talking tree with tickets for leaves. The 12-year-old company, which in 2007 became a division of eBay, reported that the ads paid off with #TicketOak trending nationally three times in the week the campaign launched. The company, which has 240,000-plus Facebook fans, said that the campaign lifted StubHub awareness by 20%, and that online ads placed in the 95th percentile for effectiveness, according to a Dynamic Logic brand study. StubHub, which reports it beat traffic targets by more than 20% in the months following the launch, rolled out a new spot last monty featuring the ticket oak imagery.

Ray Elias, CMO of the San Francisco eBay unit, says 2012 is about ubiquity for the brand. He talks to Marketing Daily about how the company has grown and what's next in the digital event-ticket space.

Q: Stupid question: why advertise at all? Can't the business model be based on search?

A: At this point, we are a multibillion-dollar business with 15 million unique visitors per month, and we are really trying to push into that upper stratosphere of e-commerce businesses, so some brand building is in order. But since the average fan goes to 1.5 live events per year, our marketing strategy is not just building the StubHub brand but marketing live events, which is something we've brought to this space. So really we have a multi-layer strategy: building the StubHub brand and its equity; going after direct response from fans coming to search engines for specific events; and driving awareness in general about the event landscape, which is more at the local level.

Q: What is the competitive set?

A: Craigslist, TicketMaster -- but there are a lot of other marketplaces, so there's lots of competition out there and everyone has gotten smarter about search. While we feel like the leader and index high, it's worth building our brand to continue to have that.

Q: How is all of this different from how StubHub used to position itself?

A: We are at a critical point as a company and brand. Historically, we built up marketing with low-hanging fruit, with the majority of marketing being search, sports-talk radio and media reaching the passionate live event-goer. What we used to be was the place people went to when there was no option: "sold out, so what" was the tag line we used back in the day.

Q: Where is StubHub going in terms of its services?

A: As an industry, we are all chasing something similar: discovery. Most of the time you have no idea what's happening as a fan other than maybe the Yankees are playing, or that a certain major act is in town on any given night. But by and large, 40% of primary tickets go unsold. It's distressed inventory, so the opportunity to drive more discovery and offer a complete e-commerce product, from "what can I do tonight?" to delivering a barcode to your phone that can get you into an event -- there are very few places digitally that can deliver that end-to-end service.

Q: You launched a big campaign this year. Will you maintain that level of commitment?

A: As long we are bringing in ROI, we will spend. We have enjoyed continued success over the last eight years; every year has seen record growth. And as we continue to grow, our marketing budget grows with it.