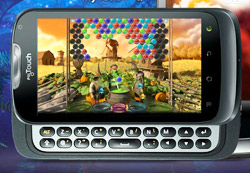 Looking to tap into its key demographic of women 25-54, T-Mobile is moving into the social gaming world, by sponsoring a social networking version of King.com’s “Bubble Witch Saga” on Facebook.

The primary focus of the campaign is to build awareness around the launch of T-Mobile's new myTouch devices by advertising on Bubble Witch Saga, which has more than 17 million monthly players, most of whom are women ages 25-54. Using technology developed by MediaBrix, the campaign will utilize video advertising within the game to promote the myTouch devices.

Bubble Witch is a puzzle game in which players match similarly colored bubbles with each other to pop them and gain points. T-Mobile’s sponsorship includes a pre-game advertisement noting the game is now available on mobile devices (and displayed on several T-Mobile devices), as well as a logo in the upper right-hand corner of the game during game play.

"King.com's Bubble Witch Saga is a natural fit with T-Mobile, given the audience demographic, the large player base and the high engagement levels of players of the game,” said Mark Charkin, executive vice president of advertising at King.com, in a statement. “Over a year following its launch, there are now more than 17 million monthly players of the game and the average user plays many times a day.”