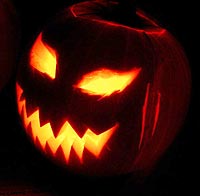 Fright night is going to get crowded this year, with 170 million expected to get their ghoul on this Halloween, according to a new survey from the National Retail Federation.

That’s a record high for the 10-year-old survey, it says, and represents 71.5% of the adult population, an increase from 68.6% last year. People also plan to spend more than they did last year, with the average person expecting to ante up $79.82 on decorations, costumes and candy, up from $72.31 last year. That means Halloween spending is forecasted to total $8 billion.

The survey, conducted by BigInsights and based on some 9,300 adults, also polled people on how they decide on Halloween costumes. And while most are pretty predictable, with 35.7% getting ideas from stores, 33.7% from online searches and 23.7% from friends and family, social media is gaining clout: Some 15.2% say they will get ideas on Facebook, and 7.1% hope to find inspiration from Pinterest.

The spending forecast is good news for retailers, and follows a strong 2011 Halloween, where spending topped pre-recession levels, and is typically good business for seasonal marketers. Amusement and theme parks are moving full force into haunted-house and hayride mode, for example. And Spirit Halloween, the largest seasonal Halloween retailer, says it is opening 1,000 temporary stores across the U.S. and Canada.

But mainstream marketers are milking it, too: McCormick is selling special food colorings, for example, while Hostess is offering ScaryCakes and GloBalls. And with the NRF poll finding many consumers are still spooked by the economy, retailers are already using promotional prices to tempt shoppers. Victoria’s Secret’s Sexy Little Sergeant costume is already marked down; Target is taking 20% off many costumes, and Walmart is “treating” online shoppers to free shipping.