Truth Takes Its Act On The Road 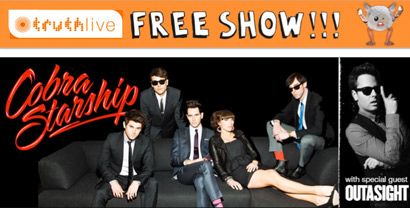 Live music isn't new to the Truth campaign, a 12-year-old program aimed at keeping kids from taking up cigs and other tobacco products. But Truth has never tried its own branded concert series until now. The Washington, D.C.-based organization is launching TruthLive, which will feature bands Cobra Starship and Outasight, and visit five East Coast and southern universities this fall.

With a "Sing Out" theme, the concert series includes on-campus activities featuring the Truth truck and Truth tour riders -- all supported with advertising and promotions, gear and social media.

Developed with Truth's AOR, Boston-based Arnold Worldwide, New York-based Escalate and Los Angeles-based marketing and creative agency Viva La Rock, the tour kicks off on Oct. 3, with a concert at the main Pennsylvania State University campus in State College, and ends Oct. 11 at Clemson University. At each stop, Truth is doing on-campus promotions, at which students can get tickets to the concert.

Eric Asche, CMO at Truth, says the organization is also using the tour to promote its new "Flavor Monsters" digital game, which launched this summer. He says both the tour and the game are part of Truth's big-picture strategy of shifting from a pure message paradigm toward engagement. "The goal is to produce a portfolio of products throughout the year that give us a sustainable presence in the marketplace," he says, adding that messages alone won't cut it any more. "Over the years we have been known for advertising, but we don't want to be solely dependent on 30-second spots."

And, he adds, new programs like the Flavor Monsters game and the TruthLive tour means the organization is now also competing with more than the tobacco industry -- even more reason for the organization to behave like a brand, not a bullhorn for a health message. "We are competing with other digital games and with other events as well. So we have to offer something of value, and we have to evolve to remain competitive with tobacco companies."

It's axiomatic that it costs more to conquest than to create a new customer, but the stakes are higher in tobacco because there's a world of difference between addiction and loyalty. Asche points out that in the U.S., 90% of all smokers began before they were 20 years old, and more than 80% of adult smokers tried smoking by age 18. "And this is the only legal market that loses 1,200 customers each and every day because they use your product. Put yourselves in the shoes of the industry: They call [young people] who take up smoking 'replacement smokers.'"

He says the new concert tour is a way to compete with the tobacco industry in critical local markets. "They have a presence on the ground in every single community, so we have lots of catching up to do to compete on the ground."

Why focus on college kids? "The higher level of social smoking happens on college campuses," Asche explains. "And college students have a huge influence on the younger generation. You may have college kids treating smoking as a social pursuit, but they are dabbling with a highly addictive product and influencing kids looking up to college age as mavens of cool. Particularly when it comes to social behavior."

Within each concert venue, Truth will have graphics on concourse floors detailing tobacco statistics. The program also extends Truth's new campaign, focusing on flavor additives that tobacco makers use to lure young consumers.

The two bands, Cobra Starship and Outasight, were part of the 2008 Vans Warped Tour. The two acts also appeared in Truth-related videos at theTruth.com and on Fuel TV and in a fuel.tv podcast.

Truth will run on-campus advertising prior to each event online and in college newspapers. The organization will also do postings in high-traffic areas on each campus. College campus marketing teams will also hand out fliers directly. Truth is also promoting the concert series on social media and TheTruth.com, and Twitter.

Asche says the initial five-stop tour is something of a beta run for Truth. "We are doing only five stops now, but the hope is we will grow and expand to more. Part of this five-city tour is proof of concept, to gain experience not only producing but owning the entire process from start to finish." He says Truth will continue its relationship with the Warped tour.