Report: To App Or Not To App 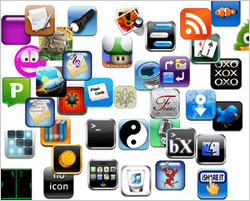 The rise of smartphones, tablets and faster data networks ensures the apps craze won’t dissipate anytime soon. Already some 40 billion apps have been downloaded to date from the App Store and Google Play. On top of that, people spend more time with apps than the mobile Web and app users tend to be younger and more affluent than the overall population.

So what’s not to like for marketers? A new Forrester study points out that while consumers may be embracing apps more than ever, it doesn’t mean they want to download your branded app. The report, “Mobile Apps for Marketing,” authored by analyst Melissa Parrish, lays out a number of factors to consider before pushing ahead with app development.

For one thing, the reach of apps isn’t as wide as it looks at first glance. Only 43% of U.S. mobile users have any apps on their phones, amounting to 39% of all online adults. The number of tablet app users is just 9%. And only certain app categories -- such as weather, navigation, social networking and games -- are used by more than half of app users.

So unless you have a brand like The Weather Channel or Facebook, you face a higher hurdle climbing app store charts. That means investing in marketing to promote an app or hoping someone comes across it in a search. A user still has to actually download the app, wait for it to install, and then deal with periodic updates.

In weighing the pros and cons of apps, Forrester says marketers should ask whether their target audience is using mobile apps. Gen Y and Gen X together make up about two-thirds of the app audience. But only 19% of what it calls “Older Boomers” (ages 56 to 66) use mobile apps. So if that’s your target demo, apps might not be the best tactic.

Companies should also look at whether creating an app would advance its business objectives. Forrester says apps are generally better suited to reaching consumers later in the customer lifecycle -- once brand awareness and affinity are in place -- leaving apps the job of enhancing the brand experience or building loyalty.

Another test is simply to consider whether the app is something people would use more than once. Even if downloaded, apps tend not to have long shelf lives. Among smartphone owners, 68% open only five or less apps at least once a week, according to a survey released by the Pew Research Center’s Internet & American Life Project earlier this year.

“The stickiness of a mobile app is good for someone with deep affinity with the brand, and an ongoing relationship,” Daniel Blackburn, mobile practice lead at Rosetta, told Forrester. “If the purpose is more sporadic and one-time, it makes sense to look at the mobile Web.”

Once the decision is made to create an app, Forrester recommends that marketers follow a four-point “addressability framework” to make sure their app isn’t used once and deleted. The first step is to look at who the intended app customers are -- for example, whether they are potential new users or brand loyalists in search of rewards.

Second, figure out what the context is for the app -- where and when people will use it. Third, determine what need does the app fulfill, and fourth, choose the right technology to suit the purpose of the app. The last point involves decisions about whether to build a native app or use Web technologies like HTML5 and whether to create a tablet or smartphone app.

Facebook this year ditched HTML5 for its own mobile app, but Forrester recommends starting with Web-based tools for creating an app because they’re cheaper and can be translated more easily across devices and are faster to update.

On smartphone versus tablet apps, the report emphasized that phone apps lend themselves to shorter interactions while people are on the go, while tablets offer more of a lean-back experience for consuming content.

apps, media measurement, mobile
1 comment about "Report: To App Or Not To App ".
Check to receive email when comments are posted.
Next story loading