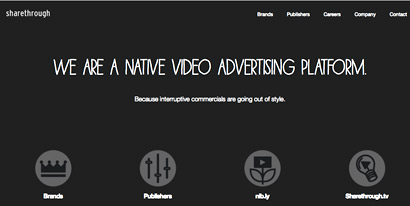 “Brands and agencies are doubling down on video production beyond traditional 15-to-30-second ads, and there is huge demand for premium distribution of this content,” Dan Greenberg, cofounder and CEO of Sharethrough, said Wednesday.

According to Greenberg, the new platform will help publishers achieve the engagement rates that brands are looking for, not to mention the brand lift and user experience that advertisers are experiencing on closed social platforms like Facebook, Twitter and YouTube.

The startup already boasts a network of millions of blogs thanks to direct partnerships with WordPress, The Awl Network, Forbes, Thought Catalog, and other platforms.

With the help of its partner network, Sharethrough says its new product is already on track to generate $40 million in revenue, this year.

The technology also allows advertisers to provide a title, caption or other description about the video to drive higher engagement.

Founded in 2008, Sharethrough is a privately held company based in San Francisco, Calif.