Mobile Goes to the Polls 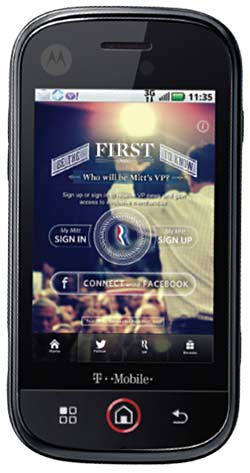 This presidential election, the big winner may well be mobile advertising

From the looks of things, it will be impossible to find positive political ads this fall. If, between now and November, you need to be reminded why you can’t stand a certain candidate, negative ads will be as handy as your mobile phone.

Just as the Internet was an important factor in the 2008 election, geotargeted mobile advertising is political advertising’s new technological toy this fall. Candidates and Super pac advertisers will exploit mobile not only to deliver their newest attack ads, but to draw supporters to a candidate’s nearby rally, pass out campaign literature or just get out the vote on Election Day.

Or -- and most crucially -- raise money for campaigns.

In battleground states, app and email delivered messages will get hot and heavy. Given the presumed accuracy of mobile gps systems and unrelenting political polling, mobile political ads will likely be customized.

That kind of pinpoint political advertising may prove to be valuable in this election — particularly in regard to the coveted undecided vote. As nbc’s Brian Williams told Jon Stewart, “Forget about swing states, it comes down to 12 counties in the United States.”

Weather Channel can localize political ads just like it can create different forecasts for Jersey City and Hoboken,  “We think of the Weather Channel as a network of 40,000 small local apps,” says Pat McCormack, vice president of mobile sales and strategy.  That’s how many zip codes there are in the United States.

For all of its pinpoint ability, though, mobile-ad plays like weather.com offers probably aren’t going to be used by many congressional candidates. Even though it may make sense — “$1,000 a month would make a difference,” says one political consultant — those campaigns don’t have the money or the inclination to spend it on a new advertising source.

But for national campaigns, Weather Channel and Jumptap will more finely hone these ads. To this end, they will use third-party data supplied by separate deals Jumptap has with Catalist, an organization that compiles information for liberal causes, and i360, which does the same for conservatives.

Catalist, for example, boasts that it has a database of 258 million Americans, containing 358 terabytes of information, which it claims is 17 times the amount of text data stored by the Library of Congress. Although i360’s assets seem slightly less exhaustive — data on only 187 million Americans — the objective is the same when it comes to mobile advertising.

When the deal was announced, Jorey Ramer, founder and vice president of development for Jumptap, said, “Third-party data, combined with Jumptap’s unique zip-code level targeting, has already proved to increase ad lift across top verticals. Our partnership with i360 ensures the right messages are served to the right audiences on their mobile devices.”

That ability to fine-tune the message, McCormack says, makes the Weather Channel app “like a virtual political lawn sign across the front yards of suburbia.”

The Weather Channel, in all its forms, certainly has an audience. According to Magid Associates, on all of its platforms, Weather Channel has 163 million unique visitors a month. Nielsen says that monthly, weather.com alone reaches 30 million consumers. It claims to be the second-most used app on all smartphones, behind only Facebook.

It seems everybody in the political ad business has heard how in 2010 Minnesota Rep. Michelle Bachmann bought site-specific advertising only accessible to iPhone users at the Minnesota State Fair. A Bachmann message accused her opponent of having voted to raise taxes on fair-goers’ cherished beer and corn dogs. It was a geo-targeting smash hit.

On a more modest level, Jumptap (before it was workign for Weather Channel) placed targeted mobile ads for Mitt Romney during the Republican primaries in Iowa, New Hampshire and Florida, These ads were custom-tailored on the spot. And though it seems primitive today, Barack Obama used a text message in 2008 to name Joe Biden his running mate.

It can’t be denied. Mobile apps are proliferating, and this presidential election will test them for the first time.

Paran Johar, Jumptap’s chief marketing officer, says total spend in this election might only reach “into the seven digits” on mobile apps. That’s not much, especially considering that the Center for Responsive Politics estimates $2.5 billion will be spent on the election by President Obama and Mitt Romney (or their Super pacs). But it’s a lot, considering that during the last presidential election, iPhones and Android smartphones were not common. The bigger money seems to be gravitating from desktop email to mobile email.

Eric Frenchman, the current chief Internet strategist for the Connell Donatelli agency’s Campaign Solutions, ran Bachmann’s digital efforts in 2010 (he was the one who cooked up that Bachmann state fair gimmick) and also ran John McCain’s digital campaign in 2008. Frenchman predicts that four years from now, political fund-raising will be significantly changed —perhaps more than any other medium — by mobile technologies.

Increasingly, people are using devices — rather than desktop computers — to open email, and that may become a significant trend for political fund-raising.
But, surprisingly, that’s not necessarily for the better.

“Historically, people have been much more likely to open an email on their desktop computer [than on their smartphone],” explains Jascha Franklin-Hodge, chief marketing officer for Blue State Digital, a specialized digital advertising agency that deals mainly with Democratic candidates or socially liberal causes.

Now, he notes 30 percent open their email on their mobile devices, up from only 10 percent a couple of years ago. That statistic contains a potential problem.

“I don’t know about you, but for me I’m much less likely to click on a link on a mobile phone than when I’m on a desktop,” Franklin-Hodge observes. “It’s going to load up slowly, and it’s going to give me a [hard-to-read] page that probably doesn’t have mobile authorization on it on the other side of the link. So we’re kind of training people by virtue of giving them poor conversion experiences when we give them a poor experience on a mobile email.
“We’re training them to not click.”

And even if they do, contributing to a campaign on a mobile device is harder in practice than it is in theory. Mobile users might be outdoors, be in an  inappropriate environment for campaign donations, in a hard-to-;aneuver place, or otherwise engaged. Even if a supporter would like to give, he has to first locate his credit card, then input the card number, its expiration date and perhaps the card security code, and finally, he has to write his name and address. “That’s kind of a non-starter for most people,” Franklin-Hodge says.
For campaigns and nonprofit fundraisers, “the mobile revolution should be really scary” because would-be contributors will be asked to give via a device that, in unique ways, will make it difficult for them to do so.

“I think it’s going to lead to an overall decrease in conversions [contributions] unless people implement smarter solutions,” Franklin-Hodge warns.

Of course, he wouldn’t bring up this snag, if he didn’t think Blue State had a pretty simple-sounding, user-friendly solution.

Blue State has devised something called Quick Donate, which creates an easy way for a campaign or fundraiser to automatically tap into a consenting donor’s information, including credit card number. Much like Amazon, which retains a customer’s information in order to facilitate purchases, Quick Donate permits fast transactions. Quick Donate also allows for a donor to respond with a text message stipulating a dollar amount for a donation. The transaction happens in an instant. (The Romney campaign is said to be working on a similar plan.)

Rapid response is the main idea. “Our goal there is to eliminate the conversion funnel by making it a single action and not have to pull people along a complicated path especially when they are mobile,” Franklin-Hodge says.

Even President Obama used Quick Donate to make a contribution to his own campaign in a YouTube video. “This is all pretty convenient,” he says to the camera. The screen then “asks” him whether he would like to save his payment information, to which he responds in the affirmative.

Franklin-Hodge has “a very good point,” says Frenchman, who has placed more than $175 million in digital advertising for Republican candidates or conservative campaigns. “Email is still the driver of contributions for campaigns. A lot of people think Facebook or search or display ads [is a better motivator]. It’s really email. So, when we set up, we always make up our mobile donation page easier to fill out on your phone. You’ve got to think about the small screen.”

Frenchman bets that four years from now, the mechanism to give via mobile will be even quicker. “The more sophisticated marketers will look at their mobile ads different than their desktops.”

Like other advertisers, politicians notice that smartphones are advertising devices that go everywhere a person does. That’s hard to beat for rallying the troops or garnerning contributions.

Weather Channel’s McCormack says that 77 percent of its iPhone users go to the site on a daily basis. “We know people go to their smarphones before they even open the blinds. Many people turn off their alarm clock — which is on their smartphone — and flip on the Weather Channel app. So we’re a habit first thing in the morning.”

The downside is that mobile sites may engage their users, but the dwell rate isn’t very high. So getting that banner message seen is still a crap shoot. New research from Hipcricket, the mobile marketing firm, says 35 percent of mobile users surveyed have “never engaged” a mobile ad. It’s possible that mobile ads are only useful when consumers search for a location or are physically shopping.

If that’s true, then getting the electorate to donate via their smartphones might be more of an uphill climb than anticipated. But in terms of getting or keeping voters engaged, that’s a different story.

“You’re going to see it heat up,” predicts Jumptap’s Johar,“after we start overlaying our third-party data on that inventory, where you can actually target by political affiliation. I think this is the year you’re really going to see an evolution in terms of mobile advertising for the political vertical.”