Oh, the lowly banner ad. Since the first one squeezed through a 56k modem nearly 20 years ago, the Web banner has been seen as either a bane or a boon (or both) to advertising.

For marketers and publishers, banners were hailed as advertising nirvana, providing highly targeted, transactional display units that could be monetized and monitored — all in real-time. For consumers, banners were perceived as novelties at first, but quickly devolved into Web page irritants, thwarting user experience and cluttering otherwise elegant site designs with flashing, blinking nonsense. For creative people, banner ads were (and still are today) both a challenge and an opportunity. It’s a shame that so many of them are odious.

Despite general disdain for the banner ad, though, it’s a digital display stalwart that’s probably here to stay. At least for the foreseeable future. Thankfully, a lot has changed in the years since the first banner ad appeared online. Credit Moore’s Law for facilitating much of that change: significantly increased bandwidth, better technological options, cleaner design, and a more strategic and disciplined approach to messaging consumers online have all contributed to the rise (or rebirth) of the once reviled Web banner.

But let’s take a step back.

As industry legend has it, the first commercially viable banner ad appeared on October 27, 1994, on hotwired.com, which was back then the online home of Wired magazine. The advertiser was either at&t Corp. or Coors Brewing Company’s Zima brand, depending on which source you choose to believe. Most people, however, credit at&t Corp.’s inaugural banner ad, which ran at a measly 468-by-60 pixels, as the shock troop of the digital advertising revolution.

Since then, digital display advertising has grown to become one of the biggest — and arguably one of the most important — channels for marketing. According to eMarketer, the rise of digital display has been supported largely by increased investment in banner and video ads. Advertisers spent an estimated $6.23 billion on banner ads in 2010, which grew to $7.61 billion — or 24.3 percent of total online ad spending — in 2011. By 2015, banner ad spending is expected to reach $11.73 billion.

This evolution has brought both people and practices from the software development discipline to advertising. What began as an uneasy courtship progressed into a long-term relationship, and with the advent of widespread, high-speed Internet access, the partnership between advertising and technology looks like it will be everlasting. And unlikely as it may seem, the banner remains an often-maligned but resilient component of the digital advertising toolbox.

Here are a few highlights (and lowlights) from the quick, and sometimes scattered, evolution of digital display advertising.

1994: Hotwired.com ran the “first” banner ad for AT&T Corp. The modest banner used a simple call to action with copy that read, “Have you ever clicked your mouse right here? You will.” A humble beginning, but echoes of this thought can be seen in Google’s “Watch This Space” campaign from 2010. Subsequent display campaigns on hotwired.com featured banners from Coors’ Zima brand and Club Med.

1995: Within a year, banner ads gained so much popularity that DoubleClick — the original banner measurement and placement firm — was created, heralding the profit potential of digital ads. Following suit, InfoSeek and Netscape began selling ads based on cost-per-impression, versus the pay-per-click model that was often used by first-mover online advertisers. AT&T also upped the ante in 1995, creating an interactive banner that allowed users to send a message through a virtual pager that would be displayed for the world to see within the banner.

1996: By 1996, digital advertising was becoming such a hot advertising medium that the newly founded Internet Advertising Bureau (which later became the Interactive Advertising Bureau, or the IAB) established the first standardized guidelines for online ad units. During this year, the first animated banner ads were released by AT&T and The College Network. AT&T also released the first interactive image, which considered a user’s needs or preferences.

2000: Taking digital display advertising to a new level, Google unleashed AdWords, a pay-per-click service accessible to small- and medium-sized businesses that did not necessarily have access to an agency. Though small in its beginnings, AdWords gave prominence to performance-based ad models, and today accounts for a lion’s share of Google’s ad revenue.

2001: The early years of the new Millennium gave birth to pop-up and pop-under ads, the bane of nearly every computer user’s existence. These ads were initially effective, with their quick and novel calls to action proving to elicit response more often than static banner ads. That novelty quickly wore off. Today, most computers have pop-up blockers and the ad format is more synonymous with viruses than with cutting-edge digital-marketing practice.

2005: A landmark year for digital advertising, 2005 began the era of ads that foster interaction between brands and their target consumers. With one click, a banner ad would become a minisite that held a wealth of information, quizzes and games. These ads also began to incorporate small-scale video. This year was also one of the last quiet years in terms of digital innovation — in 2007, the digital display space started its ascent as one of the most desired placements for advertisers.

2007: By 2007, the banner ad seemed to lose its effectiveness, leaving marketers in search of other online solutions. But the next generation of digital display advertising — skins, non-interrupting ads, and timed pre-roll ads shown before video content — had been taking root for a few years. This form of advertising allowed users to enjoy content uninterrupted, while seamlessly integrating messages about products, brands and services. These types of ads continue to this day, and have become more popular on free video sites, including YouTube, Hulu, and a number of news sites offering video content.

2008: If 2001 was the year of the pop-up ad, 2008 became the year of the ubiquitous social media ad. Popular social networking sites including Facebook, MySpace, as well as popular search engines including AOL and Google, begin to roll out self-service and engagement ads from a number of advertisers. These ads were the precursors to the hotly debated targeted ads that soon followed, inciting discussion about just how much privacy Internet users were entitled to. Streaming video also became a possibility for advertisers, with GE, EyeWonder and Akamai Technologies leading the way.

2009: Major players, including Google and Yahoo, were among the first to adopt targeted ads that followed users’ Web searches to better pinpoint their interests. But, as advertisers discussed the option of highly targeted ads, the Federal government stepped into the privacy debate. In conjunction with the Federal Trade Commission, industry trade groups (including the 4A’s, ANA and the IAB) encouraged advertisers and agencies to use self-regulation to protect consumers’ privacy. Also of note, major Web sites began to transition from banner ads to those within their sites’ content, offering a smoother experience for users.

2011: With many sites shying away from using banner ads by 2011, the digital display ad no longer focused on a call for action, turning its attention instead to consumer engagement. To further drive this home, the IAB introduced new ad units called “Rising Stars.” These units were larger than previously established units, and allowed room for videos, games and other elements that fostered interactivity and engagement. Social media sharing buttons also become universal, as a vast majority of news and entertainment sites offered consumers a chance to share content via their social network profiles.

2012: As we head into the second half of 2012, there are fewer technological limitations hampering the creativity of digital advertising than ever before. But unbridled creativity can breed chaos. So to ease the potentially bumpy transition to newer, more advanced online display formats, the IAB released a revamped version of its industry standard guidelines, which was last updated in 2003. The 2012 portfolio took into account new ad unit formats, as well as plug-and-play DIY units that many advertising platforms have released over the past few years. With these guidelines, Web sites look less cluttered for a better, more readable and more desirable user experience.

It’s not always easy to say why a banner ad grabs someone, and why it fails. But here are four of my all-time favorites, and why they’ve stuck with me:

Brastemp Water Purifier (2005/6)
Agency: Agencia Click (Brazil)
This banner is deceptively simple. The running water almost begs the viewer to engage with it, and in doing so you are delivered a very simple message. A water purifier is the subject of this piece, and that product (and its benefit) is kept in the forefront at all times.

FedEx: Just In Time (2005)
Agency: DM9 DDB (Brazil)
Nothing particularly new in a banner reading the system clock of your computer, but the use of the hands moving boxes that ultimately represent time and timeliness is a particularly memorable way to convey the message. It’s a really smart awareness piece for the FedEx brand. 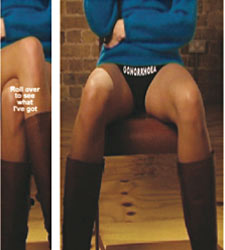 NHS: Leg Cross (2007)
Agency: Grand Union (UK)
It’s no revelation that sex has driven the evolution and popularization of technology since the advent of the camera. This banner uses the foolproof hook of sexuality to convey an important message about stds. It’s a great use of the difficult skyscraper format and rollover/expand functionality. 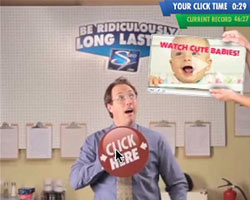 Stride Gum: Be Ridiculously Long Lasting (2011)
Agency: JWT NY
A banner that challenges the user to stay engaged for a long period of time. One person apparently did so for 67 minutes. What I like about this ad is that the engagement is tied to a product/brand/campaign idea: that the flavor of Stride lasts a long time. For that reason, I like it better than the Cannes-winning Pringles ad that used a similar technique in 2009.

Bruce Henderson is chief creative officer at G2 USA. In 2006 Henderson was the recipient of the first-ever OMMA Award for Best Use of Video in a Rich Media Banner Ad, for Ameritrade “Marathon.” And he still likes banners.