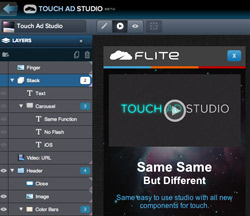 Flite has extended its cloud-based ad platform to mobile to meet the needs of publishers seeing more of their audience shift to mobile devices. The company’s new Touch Ad Studio software will allow publishers and brands to expand rich media campaigns from the desktop Web to smartphones and tablets.

Flite’s core technology powers premium ad formats, or “native advertising” that mimics the look and feel of content for client publishers, including Forbes, Wikia and BuzzFeed. In June, Conde Nast made an undisclosed investment in Flite and tapped the company to deliver ads that provide an app-like experience across its network of magazine sites.

The challenge for Web publishers is that a growing proportion of their traffic is now coming from mobile, disrupting business models geared to the traditional Web or print.

Flite CEO Will Price said about 30% of the traffic for its publishing partners is mobile. And since mobile ad rates aren’t close to being on par with the desktop Web, that means publishers are taking a revenue hit.

Flite’s new tools are meant to address that issue by allowing publishers to run ads across the Web, mobile and digital video and charge rates that are more comparable across media. The company’s platform also provides a single source for campaign analytics and for training staff, instead of working with different systems for each media category.

To date, mobile has mostly been the province of performance marketers, said Price. This new platform would help encourage brand advertisers to embrace mobile. Brands using Flite to date on the Web include L'Oreal, CBS, General Mills, Microsoft and P&G.