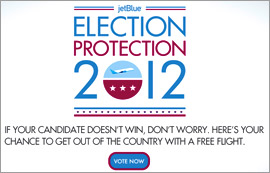 Thinking Canada? Or Costa Rica as soon as your least-favorite candidate gets elected? JetBlue Airways is going to give over 1,000 voters that opportunity. Called "Election Protection," the just slightly tongue-in-cheek program dangles a chance to escape the U.S. Although it's round trip, one could make it one-way.

The program, which launched last week, includes a microsite, jetblue.com/electionprotection, where you can do a faux selection of the president of your choice to enter for a chance to a win a free ticket to one of the airline’s 21 international destinations if the election doesn’t go their way.

“We’ve all heard it said before: if my candidate does not win, I’m leaving the country,” said Marty St. George, SVP marketing and commercial strategy for JetBlue, in a statement.

The site will also tally people’s preferred destinations and choice results. After the results are in, JetBlue will give away 1,006 roundtrip certificates to participants whose candidate lost. Tickets are good for roundtrip travel from any airport JetBlue services, including Aruba, the Bahamas, Barbados, Bermuda, Cayman Islands, Colombia, Costa Rica, the Dominican Republic, Jamaica, Mexico, St. Maarten, St. Lucia and Turks & Caicos.

On the guerrilla side, JetBlue will tout the program with roving teams in New York City for a week starting Oct. 17. The company says the teams will have iPads, campaign swag and local New York City voting information to get consumers to go vote on Nov. 6 and to sign up for JetBlue’s Election Protection.

JetBlue says it is also carrying the debates' live coverage on seat-back screens.