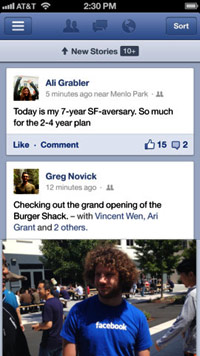 With Facebook announcing it has topped the 1 billion user mark, there’s little question that the social networking site has world-class reach. But a new study from Macquarie Research focuses on what that audience -- in particular, younger U.S. users -- are actually doing on Facebook as the key to its success as an ad-supported business.

The research showed that engagement on Facebook remains strong, but it confirmed the shift to mobile use that has left the company scrambling to catch up with its audience on the ad side. More than half (56%) of Facebook users surveyed are accessing the service from a mobile device, up from 24% a year ago. Macquarie projects that figure will hit about 70% in fall 2013.

For the study, the investment firm surveyed a representative group of 559 15-to 25 users, viewing this demographic as the trendsetters for other Facebook users. It also interviewed 420 people in California specifically, since Internet trends flow from the West Coast.

A Reuters poll released in June found that about a third of Facebook users were spending less time on the site than a year ago, raising questions about whether it was losing its appeal.

The Macquarie study found that people tend toward passive activities on Facebook, spending more time browsing updates and pictures of others than on posting their own updates or photos or using apps. Women are more likely to post content than males (20% to 17%), while men were more interested in reading or responding to others' updates (33% to 28%).

Women are also leading the charge onto mobile on Facebook. Some 61% of women are going on to Facebook mostly via mobile compared to 51% of men, and in a year's time 76% expect to log in mainly on mobile devices versus 62% of men.

Among other social properties, Macquarie suggested Instagram is one to keep an eye on. A quarter of Facebook users also use the popular photo-sharing app that Facebook acquired in April for $1 billion. A previous survey of six Facebook and Instagram users by the firm showed that young people liked the latter as a less crowded alternative to Facebook.

When it came to apps, people reported using a wide variety of titles. Most (59%) have used at least one app on Facebook, with games being the most popular category. Zynga games like "FarmVille," top apps included "Angry Birds," "Family Feud," "Marvel Alliance," Pinterest, Sim City/Sings and Spotify.