J&J's Kadlec: 'Disruption Is Over. Yay!' 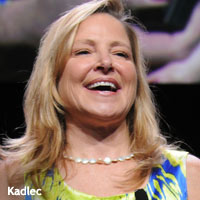 For marketers, the age of disruption is over, says Kimberly Kadlec, Johnson & Johnson’s VP of the Global Marketing Group. Addressing the more than 2,000 attendees of the Association of National Advertisers’ Masters of Marketing conference on Thursday, Kadlec spotlighted some of J&J’s most successful recent efforts, “showing that we really can make connections that change the world.”

Among those efforts that have had the biggest impact on its business results, she says, are a video campaign focusing on ending the isolation felt by HIV patients (one became a top-trending YouTube video in its first 48 hours); an anti-childhood obesity effort in Colombia; a video contest that provided free contacts for U.S. teenagers, also hooking them up with their dream mentors; a program in India designed to keep girls in school by improving menstrual hygiene, and its much-lauded effort for Band-Aids, bringing Muppets to life via iPhones. (The ad for KY Intense -- which she says is the first-ever national TV spot focusing on lesbians in a committed relationship, another big buzz-builder for the company -- also generated plenty of laughs.)

She also described its campaign to celebrate and encourage nurses as one of its most successful ever, creating an 83% awareness among nurses, nursing students and instructors and driving 2 million people to the No. 1 nursing site. “It generated more online posting than any campaign in our history.” Best of all, she says, enrollment at nursing schools rose 73%.

It’s no accident that the company’s marketing efforts are becoming so closely aligned to social responsibility, and the “intersection between sales of its individual brands and the company’s larger mission is crucial,” she says. “We are responsible to connect with people in ways that are instructive and not disruptive. We [as an industry] are so used to being in this disruptive model. So, yes, the disruption is over, and, Yay!”

conferences, packaged goods
1 comment about "J&J's Kadlec: 'Disruption Is Over. Yay!' ".
Check to receive email when comments are posted.
Next story loading