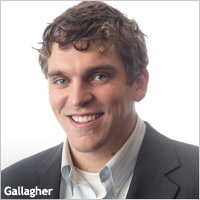 Chad Gallagher is director of mobile for Advertising.com, AOL’s third-party display ad network. The Advertising.com Group also includes AdTech, AOL Video, goviral, Pictela, 5Min, StudioNow and Sponsored Listings. MediaPost recently sat down with Gallagher to discuss the expansion of Advertising.com beyond the desktop, why marketers are lagging in mobile and whether mobile should get 7% of ad budgets.

CG: My job is to take Ad.com and make it a leader in the cross-platform space. We fundamentally believe that both buyers and sellers are sometimes siloed, and that’s not our approach. We’re much more focused on trying to solve a client or an agency’s needs by using technology to run across all platforms -- smartphone, tablet, mobile Web, app, desktop.

MP: What kind of mobile ad results are you seeing compared to a year ago?

CG: Significantly better click-through rate and conversion rates than a year ago, hitting the metrics marketers want to hit. That’s a very good sign for the ecosystem overall; it’s what’s going to drive marketers wanting to invest more in smartphone and tablet devices when they’re actually seeing the return.

MP: What kinds of click-through and conversion numbers?

CG: A 20% increase year-over-year in the metrics we’re tracking. That covers everything from text ads to display to rich media.

MP: What about mobile ad pricing? Are rates typically lower than on the desktop?

CG: It’s hard for us to speak to what direct publishers are seeing because we don’t know exactly how they’re monetizing their inventory themselves. They may be seeing lower rates -- we’re not. When we look at overall network RPMs [revenue per thousand impressions], they are virtually identical from smartphone to tablet to desktop. Which is counter to what the marketplace is saying. But it makes sense -- the amount of inventory heading into the non-reserved space in mobile is significant.

MP: AOL bought [mobile ad network] Third Screen Media in 2007 but then fell behind Google, Apple and others in the mobile ad space. What happened?

MP: Why are marketers still reluctant to extend advertising to mobile?

CG: We definitely see marketers silo-ing desktop to mobile, and it hurts the medium, as opposed to thinking about an overall digital strategy. A marketer doesn’t wake up and one day decide to show ads on an Android device. They want to accomplish a goal -- reaching women 18 to 49. Our approach is, let's use technology to do that in real time across all devices.

MP:  Can you give an example of that?

CG: One is related to an auto advertiser. This client was looking to track a couple of different metrics -- finding a local dealer, sending an email address. We didn’t have to tell them to allocate $50,000 to run a smartphone-target campaign. We were able to say, give us assets that run across all devices and let’s allow [optimization] technology to decide what’s the best place for you to accomplish your goals. Now we’re seeing a huge shift in them, moving 20% of dollars toward smartphones, tablets.

MP: The MMA has been publicizing a study it conducted showing marketers should be allocating about 7% of budget toward mobile, instead of the current 1%. What’s your take on that?

CG: It depends entirely on what somebody is trying to do. I want to encourage our clients not to force a certain percentage. We want the technology to dictate how that marketing spend gets allocated as opposed to saying the line item here is going to be 4%. That doesn’t help anyone.

MP: AOL in June announced extending its Pictela platform and Devil ad formats to mobile in June. Are there any initial campaign results from that effort?

CG: In general, mobile rich media is difficult. The ecosystem is just not set up in a way to make it easy. So the way Pictela is set up, you put your assets into Pictela, whether running a desktop or mobile Devil campaign, it’s the same assets, and it’s the flick of a switch to make it live. That sounds intuitive, but for the average marketer, that’s a pretty big deal. That has been the No. 1 takeaway.

In terms of metrics, we’re just in the early going of these campaigns. In three to four weeks, we’ll come back with first round of results for click-through rates -- conversion rates compared to normal media.