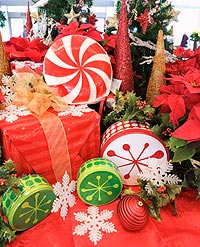 The National Retail Federation is forecasting a 4.1% gain in holiday spending this year, with the average holiday shopper dropping a total of $749.51. The trade group says it expects total spending to reach $586.1 billion.

While that includes gifts, décor, and greeting cards, the NRF says it also includes record-high levels of I-love-me spending: While some $421,82 will go toward presents for family and over $75 on friends, 60% of shoppers in this year’s survey also plan to splurge on themselves, spending an average of $139.92 on this “self-gifting.” (That’s the highest in the 10-year-history of the survey, which is conducted by BIGinsight.)

And while they are considerably less worried about the economy than they were a year ago (only 52.3% say it is affecting their spending, compared with 62.2% at this time last year), consumers are still intently focused on looking for bargains. For example, 46.4% intend to shop more sales; 31.4% say they plan to do more comparative shopping online; 23.2% will travel less and 6% plan to rely more on the muscle of their mobile devices. (Slightly more than half of all smartphone users say they will rely on them for shopping, and 64.1% of tablet owners plan to do so.)

When they plan to shop appears to be relatively unchanged from last year, with 41% intending to start before Halloween.

And whether it’s as a cost-saving measure, a time-saving device, or personal preference, the majority of Americans now say they will shop online: 51.8%, up from 46.7% last year. And on average, online shoppers hope to complete nearly 40% of all their holiday shopping via computer.)

In terms of favorite retail channels, discounters are still No. 1, with 65.3% of shoppers intending to head to big-box stores, followed by department stores, with 57.8%, and grocery stores, with 51.8%. (That represents a significant jump from last year’s 48.8%, an indication that practical gifts may be more popular this year.)