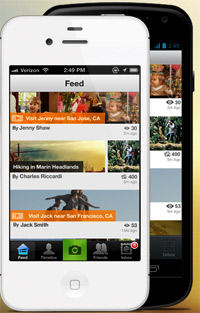 Hot on the heels of its purchase of Particle, Apple is reportedly acquiring Color Labs, a Cupertino startup focused on video and image sharing across social networks. The Next Web attributes the story to its "very well placed sources" who say the deal involves millions of dollars of the "high double digits" variety. Color Labs founder Bill Nguyen had previously sold Apple an earlier company of his, Lala.

In this case, it is still unclear what Apple might be after in the reported acquisition. Color Labs has been testing apps that allow users to more easily share videos across devices. The Next Web claims that the company built a number of apps that it never formally released in order to show potential buyers. The company has patents around HD video recording and battery saving as well as applications for patents around content-sharing groups of devices.

Color Labs had previously developed techniques for collecting multimedia from various people in a group for sharing on Facebook.

In Apple’s release of iOS 6 last month the company added a technique for sharing cloud-based Photo Stream content with others. So clearly, the company is interested in related technologies. Social media and content sharing have not been areas of endemic strength for Apple. It recently shuttered its failed music-sharing network project, Ping, for instance. It had been slow to integrate Twitter and Facebook sharing tools into the iOS infrastructure. And rivals such as Samsung seem to have identified content sharing as a weakness in the iOS ecosystem and are targeting their smartphone marketing in that direction.