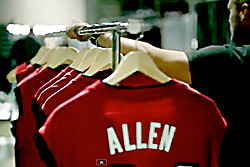 The National Basketball Association is launching a pre-season campaign to get people center-court. The new campaign is called "BIG."

The Tip-Off spot, which runs through the end of November, is intended to build awareness for the season starter with the theme that in the NBA there is no time for being satisfied with what you have earned. That spot also gives a shout-out to official auto brand Kia, with the parallel idea that as the fastest-growing car manufacturer in the U.S., Kia is working hard to remain on top. That spot shows players on court with cuts of Kia's Optima, which is the official vehicle of the NBA.

Another new "BIG" spot touts multiplatform content offerings afforded by the NBA League Pass program. That ad, via NBA Digital -- which runs through the quarter on ESPN, TNT, NBA TV, and via regional networks -- touts the TV, Broadband, and mobile content included with purchase of the pass.

The ad also spotlights player moves post-season (Dwight Howard, who moved from Orlando Magic to LA Lakers; Steve Nash, who shifted from Phoenix Suns to the Lakers; and Jeremy Lin, who left the Knicks for the Houston Rockets). Those moves are also where the "BIG" came from, as the theme line is "See the BIG names that made BIG moves in the offseason." The spot touts different media platforms by showing game highlights within an expanding and contracting screen, plus shots of Lin, Nash, and Howard in new jerseys.

The Big Shots spot features Kobe Bryant describing what goes through a player's mind before, during, and after hitting a big shot. The ad shows Bryant sitting on a stool while video cuts in of various big shots from his career and other players' careers play out on screen. It also features LeBron James, Paul Pierce, Kevin Durant, Kevin Love, and Manu Ginobili.