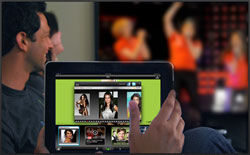 The age of multiple video screens is so fresh and new that every tidbit of real world information comes as a refreshing surprise. We know that media habits are evolving almost too quickly to track with any reliability. Whatever is true today about media consumption across TV, Web and devices is almost sure to require revision in six to nine months. But the panelists and speakers at yesterday’s OMMA Video on Devices conference in Los Angeles tossed off little nuggets of insight at every turn.

For instance, I was stunned to learn that 20% of the videos now being submitted to American’s Funniest Home Videos now come from mobile phones. Bruce Gersh of FishBowl Worldwide Media, which manages the franchise on digital platforms, says the brand launched an app last year whose sole purpose was to get more amateur submissions to what is no doubt the most successful user-generated content play of all time. “We taught our audience how to shoot on the phone,” he says. He says AFV recently marked its one millionth submitted video…which is a lot of wiffleball bat hits to the crotch.

Chris Young, CEO of Digital Broadcasting Group, recalled his recent project, the Kiefer Sutherland Webisodic “The Confession.” The seven-minute episodes were designed for an age of device-bound viewing. Although seven-minute episodes might be deemed too long for mobile platforms, he discovered that users complained most often about the segments being too short. His takeaway is that people are happy to watch longer and longer video formats on just about any device as long as the content is enjoyable.

Gary Reisman, founder of NewMediaMetrics. seemed to underscore that point in his research, which emphasized people’s emotional attachment to content. When someone is emotionally attached to a TV show, for example, they are likely to consume that content on any device they can find it. In other words, screen size and video format are less important to a media property’s multi-screen success than the viewer’s passion for that content.

The panel on second-screen programming was especially interesting to me, since I have closely followed the emerging dynamic between two screens in the living room for years. Almost everyone agreed that some genres are stubbornly resistant to “enhancement” by complementary content for a TV show running on devices. Sitcoms are tough to crack with a parallel experience. “You’re not going to improve much on '30 Rock'," quipped one panelist.

Hill Holliday’s Rob St. Louis suggested that people who are engaged in a second screen in their living rooms actually are more engaged overall in the TV programming. They even are less likely to leave the room during commercials or to change channels. Randy Shiozaki of TVplus says his second-screen app sees spikes in activity during the commercial breaks. People are often catching up with the social TV content in the app during the ad breaks.

One of the most compelling prospects raised by the second-screen panel was the true integration of the TV and device during a program. Until now, Shiozaki observed, we really have been seeing other experiences like complementary content and social activity grafted onto the TV experience as a kind of sidecar. “I think the creative community is going to spin this in whole new directions,” said Stacy Jolna, chief marketing officer and co-founder of ConnecTV.

“The creatives are starting to come up with formats where the second screen is an integral part of that experience,” says Shiozaki. “The day it is an integrated experience there will be a new form of content that uses more screens.”

I couldn’t agree more. The end game of second screening is a new kind of interactive dual-screen content format. Having video move across displays, static and mobile is really just an opening salvo in a much larger phenomenon that will involve simultaneous complementary content across at least two screens at once. We won’t be talking about “first screen” or “second screen” anymore because one might feel naked without the other.

Catch one of the most informative sessions from yesterday’s show in the archived videos.