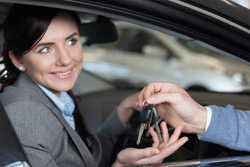 Because of the unit cost of new cars and trucks, the stakes are high for customers and dealers on the showroom floor. It’s just as high for automakers fighting a trench war for share and unit sales. Companies are inclined to mold the retail experience just as they do their advertising and marketing, and use the carrot and the stick to get ROI from dealers. Needless to say, this rankles dealers, who would rather not have Big Brother influence their affairs.

Thus, automakers and dealers have a relationship that looks more like a state of perpetual detente than a marriage. Which actually is a perpetual state of détente.

The latest Camp David issue is two-tier pricing and mandatory facility upgrades, the former (from the automakers' perspective) a way to motivate slow starters, and the latter a way to support the brand image and equity all the way to retail.

From the auto dealers, it's a "don't tread on me" issue. At a press event in Detroit last week, Bill Underriner, chairman of the National Automobile Dealers Association (NADA), said: "Two-tier pricing and mandatory facility upgrades are symptoms of a bigger overall problem -- manufacturer intrusion into dealers' businesses."

NADA has a dealer task force to focus on the fairness of the two-tier pricing programs. "The history of our industry is littered with automaker attempts to impose one-size-fits-all programs on dealers. These efforts at top-down control almost always fail," added Underriner, a Buick, Honda, Hyundai and Volvo dealer in Billings, Mont. "We favor lawful, equal and fair treatment by a manufacturer for all its dealers. Unfortunately, history shows that at times, manufacturers create incentive programs that favor some dealers over others."

Underriner explains differences in dealer brick-and-mortar self-expression and performance as an "incredible diversity among dealer businesses," and points out that it isn't exactly fair to treat privately owned mom-and-pop operations the same as one of the publicly traded aggregators, adding: "Distant corporations simply cannot understand or respond effectively to these differences."

NADA has also commissioned its second study on factory-mandated dealership renovation programs to analyze the return on investment.