A Less Polished Apple? Impressions From A Mall Crawl 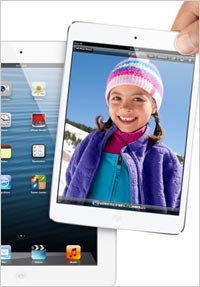 Perhaps it was pent-up shopping energy in the aftermath of Sandy in the mid-Atlantic region, but someone threw a switch this weekend when it came to mall traffic.

Starting Friday evening, I found crowds just about everywhere, with noticeable clots around tablet demo tables at Apple, Best Buy, Microsoft and Barnes & Noble. Unwittingly, I ended up doing a tour this weekend of the major tablet sales channels, and my highly subjective takeaway is that all boats likely will rise. This could be a very strong tablet holiday, and Apple is not going to own the market anymore.

My own hands-on experience with the major new tablet offerings for this season suggests to me at least that the special iPad magnetism may have been diminished by compelling hardware counterarguments by rivals and Apple’s own design/pricing decision.

My ten or fifteen minutes with the Microsoft Surface left me impressed with the platform’s nod to productivity and very engaging interface. Navigation across the walls of windowpanes can be disorienting, to be sure. This is an interface with a learning curve. Still, Microsoft rewards mastery with some slick multi-panel functionality and a convincing connection to one’s desktop experience. That all demo units included one of the detachable keyboards helped make the case that this is not an iPad clone. And by the way, the Microsoft store was almost as full as the Apple store when I visited both within minutes of one another. The Surface table had a crowd.

Apple was full as usual, and the newly launched iPad Mini was sold out. Both my wife and I got to spend time with them. She got sucked into Temple Run, while still insisting she had no use for a tablet. The thinness and lightness of the Mini are impressive, and certainly make the rivals feel bulky and that much less portable.

My impression of the much-debated screen technology and its relatively low pixel density is that it is not a big issue for the average user. I have been on a Retina Display for months, and the difference between the Mini and full-sized iPad is less apparent than I was expecting. The smaller screen using the same pixel density as pre-Retina iPads combined to make text and images rich and sharp to my eye. And after using the Nexus 7 from Google, Kindle Fire, Nooks and a range of knock-off Android tablets in the 7-inch form factor, I definitely found the iPad Mini roomier and less of a downgrade from an iPad. The width made a difference in making this model feel less like an e-book reader with benefits and more like a tablet.

All that said, I think Apple must have made a conscious decision not to own the smaller tablet market in the way it owns the full-size market. The $329 pricing keeps the brand’s marquee value, surely. But if they had priced this thing at $249, I think it likely would have been game over for the rest. This may have been cagey on their part. Perhaps they presumed that the rest of the market would be fragmented across Kindle, Nook and so many Android flavors that it wasn't worth killing their margins on the Mini to win. Traditionally, Apple seems to prefer dominating the conversation around a platform to owning the market.

I think for a lot of Americans in that next tier of tablet owners, the price differential is especially important for a device they aren’t sure will be a part of their everyday lives. The amount of consumer interest at Barnes & Noble and Microsoft suggests to me that a good number of people are interested in the tablet platform and seriously interested in models other than iPads. But they need a content story.

I think that Barnes & Noble might have a sleeper on its hands with the new 9-inch Nook HD+. After using a Nook Tablet for the past year, I was struck by how much more fluid the performance and interface has become in the new iteration. In reading digital magazines, for instance, toggling between the full-page view and a text-focused article view was very easy. Zooming was smooth. But most of all, the screen really dazzled me. Sharpness and color richness were exceptional, and the image seemed to be floating above the glass in much the way images appear on the iPhone 5. And the 9-inch form factor, while odd in the current environment, offered an excellent weight and portability. And these things start at $269. With the same pixel density as the Retina Display, slightly smaller dimensions and a very aggressive price, the Nook HD+ should not be counted out by any means.

My gut tells me that the tablet market is about to open up considerably.