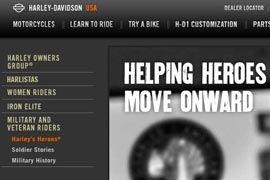 Harley-Davidson is continuing its tradition of honoring United States military veterans throughout the month of November.

The program, now in its fourth year, focuses this year on raising awareness of DAV (Disabled American Veterans) and the Harley's Heroes program through a national video campaign spotlighting two veterans who have benefited from the program.

Troy Torgerson of Wausau, Wisc., and Nick Bernardi of Newark, N.J., both served in Iraq and sought help from the DAV upon their return home. Their videos can be viewed at www.harley-davidson.com/military.

The company’s relationship with the U.S. military dates back almost 100 years. More than one-third of Harley-Davidson customers are veterans of the armed forces, and approximately 15% of all Harley-Davidson employees are veterans. In recent years, in addition to the Harley's Heroes program, Harley-Davidson has paid tribute to the nation's veterans through donations made to the World War II Memorial and the Vietnam Veterans Memorial.

Harley's Heroes brings DAV mobile service offices to Harley-Davidson dealerships throughout the country on more than 200 days out of the year, bringing services directly to where veterans live.

DAV National Service Officers, all of whom are disabled veterans themselves, help veterans understand and apply for the benefits available, including medical treatment, disability compensation,  insurance, home loans, continued education and training, and more.

Veterans get help navigating the process of applying for and securing the benefits to which they are entitled through the Veterans Administration. Last year, Harley's Heroes helped the nation's heroes claim tens of millions of dollars in earned benefits.

Harley-Davidson has provided $2 million in grants to the DAV over the past five years. DAV MSOs visit over 800 U.S. locations each year and serve more than 18,000 veterans per year through this program.

"Through these veterans' stories, we're hoping to inspire other veterans by showing them the positive impact DAV can have, as well as motivate them to pursue the benefits they deserve," said Mike McCann, director of core consumer marketing at Harley-Davidson, in a release. "The services the DAV provides all across the country day in and day out are vital to helping injured veterans move onward with their lives, and we're proud to support their efforts with the Harley's Heroes program."