Revenge Of The Brick 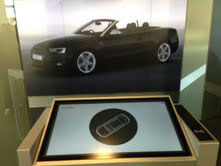 I just returned from London, where I gave a keynote presentation on Flip the Funnel and how customer service and customer experience will become the key strategic differentiator in an increasingly commoditized world.

The next day, I witnessed complete validation of this hypothesis.

As I was walking down Piccadilly, I passed an Audi showroom unlike any I had seen before. In fact, it’s the first concept store of its kind for the brand in the world. The showroom was exceptionally clean, with one or two models on the white floor. No desks. No papers. No chairs. Several color coordinated, well-dressed salespeople. Several interactive kiosks. And wall-to-wall giant synchronized TV screens.

I proceeded to customize my swanky new S5 convertible using the interactive kiosks and with an effortless swipe, I was able to project my configured car onto the big screen. I was also able to swivel the car using gestures on the kiosk, but I was just get started.

Using Microsoft’s Kinect technology, I was able to use my body as a joystick or mouse. I could take down the roof and watch it roll back in real time. I watched the car drive off and come back to rest with surround sound emulating the actual sounds of the car.  I was truly surrounded by a realistic experience of what it might feel like to drive an Audi S5 Convertible.

There were other gadgets, bells and whistles, like the ability to save my session to a USB and whenever I returned, pick up where I left off.

The experience was terrific, but what really blew me away was the epiphany that bricks-and-mortar stores were not dead, but alive and kicking. They were about to go through an incredible revival or even renaissance.

There were those who once said (and I’m probably one of them) that bricks-and-mortar stores were endangered species, and that everyone would shift to online shopping, customization and commerce. There were also those who said (I was not one of them) that no one would ever move to digital channels to purchase things like clothing, homes or cars.

As it turns out, they were both wrong.

What I witnessed in this London showroom was the future of retail: a holistic, immersive physical digital experience. One in which human beings still played a key role. The best of all worlds.

In that moment, I realized that purchasing cars online is not the optimal experience. It just isn’t possible to get an accurate or lifelike feeling of what it must be like to drive an Audi S5. The most accurate experience would come from actually driving one — a test drive — but  what I witnessed was pretty damn close.

I believe the future of bricks-and-mortar stores is a bright one if – and only if – it is anchored around a core digital experience and supported by humans.

Not only for traditional brands, but pure plays as well. For example, I expect to see an Amazon.com store in the near future; one without a single piece of merchandise in it. Why would you need a book, when everything can be swiped, synced and swooshed into your Kindle? I expect Barnes & Noble to be out of business if they cannot figure out a way — quickly — to emulate the Audi showroom and in the process, get rid of as many dust-gathering books (and space) as possible.

People might continue to window show online using their screens as nose warmers, but when they want to actually buy, there’s a lot to be said for getting off their rear ends and making the physical commitment to get into a store.

It’s back to the future, baby. With one hell of an ironic twist.