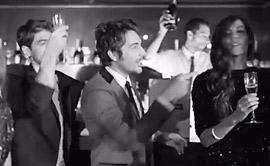 Martini Sparkling Wine’s new international campaign focuses on those who always find -- or create -- a reason to celebrate.

After installing the international line “Luck Is An Attitude” in 2011, Martini continues to celebrate the same brand value with the agency Fred & Farid Paris-Shanghai through four new films.

Barbara Gonzalez is the new face of the brand, alongside Yuri Buzzi.

Following in the steps of Buzzi, the brand’s male ambassador, who was chosen after the Martini Kisser Casting in 2011, Gonzalez is a 27-year-old Spanish ex-Olympic gymnastics contender. She was chosen on Oct. 16 in Milan by the international jury including Christian Louboutin at the end of Martini Royale Casting.

The director Matthew Frost was chosen by Martini and Fred & Farid to bring these four celebratory situations to life. Frost is both a photographer and a director, and was chosen for the sense of glamor and lightheartedness that he injects into his work.

Midway through the first spot, copy is superimposed on the spot: “Here’s to those who don’t take no for an answer.” The upbeat black-and-white spot end with the voiceover stating: “There’s always a reason to celebrate. Here’s to those who find it.”

The spots are edited to 15-second and 30-second formats. The first one launched on YouTube on Nov. 14. The effort will break on TV in Belgium and the Netherlands on Nov. 19 and in the U.S. in spring 2013.

The Martini YouTube channel includes other videos that detail the tryouts for the lead spot in the commercials and the path that Gonzalez went down to get the break.