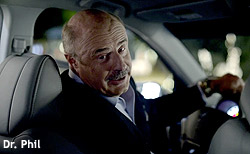 In the past three years, Acura has used humor for its end-of-year sales events. The automaker isn't alone in that approach, but has tended to be a bit more "out there" than most by bringing in celebrities to play themselves. Last year, the "Season of Reason" campaign, about people who go to extremes with frivolous purchases, featured chef Gordon Ramsay and singer Bette Midler, whom a regular Joe hires to entertain at his family's holiday dinner.

This year, the company wrangled Dr. Phil McGraw, who has never appeared in a TV ad before, and personal finance guru Suze Orman to help serial tchotchke purchasers stop their behavior. The overriding theme is that instead of throwing their money away on gewgaws, these neurotics could buy an Acura.

The effort, via long-time AOR Rp&, comprises three spots -- with McGraw, Orman and Santa, respectively. Each rolls up in one of three Acuras (MDX, TL and ILX) just in time to stop shoppers from buying things like a giant Christmas tree and an animatronic Santa. The three do in-vehicle counseling during a high-speed ride, suggesting the consumers opt for the putatively smarter purchase, an Acura. The voice-over spokesman, actor James Spader, intones, “This holiday, listen to the voice of reason. Acura's Season of Reason sales event.”

McGraw and Orman did their own stunt driving versus using the traditional green screen background, per Acura. Spots will air on NFL on CBS as well as on cable and spot TV. Campaign creative will be featured in digital and email marketing, POP kits, display ads and customizable dealer assets, including print, radio and banners.

Susie Rossick, senior manager, Acura regional marketing, tells Marketing Daily that McGraw agreed to jump into the ad space because he liked the idea. "He liked the humorous approach to a non-nonsense attitude; we are embracing his personality and not taking him out of his comfort zone. For Orman, same thing," she says, adding that McGraw will run a "making of" segment on his show.

"The fourth quarter is very important for getting those sales numbers up with great offers, but the challenge is breaking through all that clutter and making sure we are resonating with consumers," she says.

The campaign focuses on spot buys, with 75% of the media commitment in key Acura markets with the heaviest retail footprint, per Rossick. "Acura does this differently," she says. "We funnel regional and national dollars together, so do not have two separate messages going."