Mobile Shopping To Double On Thanksgiving 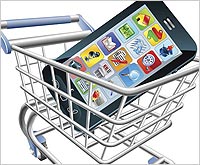 Brick-and-mortar stores have Black Friday. Online ones have Cyber Monday. What does that leave for mobile? Thanksgiving. E-commerce data from IBM/Coremetrics last year showed that 15% of consumers used a mobile device to visit a retailer’s site on Turkey Day, up from 6.5% the prior year.

With hopes that “mobile Thursday” will catch on as the latest holiday marketing phrase, Digitas released its own survey results today showing the proportion of mobile shoppers on Thanksgiving will nearly double to 28% this year. That trend is even more pronounced among young people, with 38% of students planning to shop on smartphones or tablets following the day's ritual feasting.

Retailers including Digitas client eBay plan to capitalize on the growing appetite for mobile shopping on Thanksgiving by posting 20 mobile-only deals on its eBay app at exactly 5:23 EST on Nov. 22. A recent survey showed that this was the time that most people, on average, would end their meals. (It will launch another 20 at 5:23 PST for West Coast shoppers.)

eBay has been among the online companies pushing most aggressively into mobile in recent years. In the third quarter, the online marketplace said 800,000 shoppers made their first-ever eBay purchase through a mobile device. It also expects its PayPal unit to handle $10 billion in mobile payment transactions in 2012, up 150% from last year.

“They have 100 million downloads of their various eBay apps, so they have a huge audience of people turning to them when they want to shop,” said Chia Chen, SVP, mobile practice lead at Digitas. “And eBay wants to drive growth in fulfilling people's needs when they have them.”

Others, such as Toys “R” Us, HSN Inc. Rue La La and ideeli, are also rolling out mobile-specific offers this Thanksgiving evening, according to a Reuters article. A separate forecast released by Adobe Systems today projects that 21% of online holiday sales this year will come from mobile.

The Digitas survey, conducted by Harris Interactive earlier this month among a group of 2,059 adults 18+, however, also highlighted some shortcomings of mobile shopping. It found that three-quarters (76%) who shop on both a mobile device and a computer say it's easier to do so on the latter. Only 8% said mobile was easier.

Chen pointed out that some retail sites still are not optimized for mobile devices and others have not gone far enough in adapting their presence for phone and tablets. There are also just the inherent limitations of a 4-inch screen and the variable quality of a wireless connection.

Regardless, Chen said Digitas will be watching closely to see if Thanksgiving lives up to the “mobile Thursday” billing. “We definitely want to see how actual commerce behavior on Thanksgiving Day turns out to be. We're also looking forward to seeing whether other marketers have advertising efforts really incorporating mobile at the core,” he said.