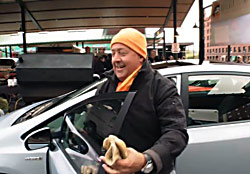 Impressions mean less these days than proliferation through social channels: It's about the buzz. And that's what NBCUniversal Integrated Media purports to derive with its "Brand Power Index" (BPI) ranking of brands.

The NBCU division tracks buzz by gauging online chatter around some 500 brands. In the auto sector Mercedes-Benz, Toyota, Chevrolet, GM, and Acura lead the four-wheeled pack because of their efforts around music, food, and gaming.

John Shea, EVP and CMO of the NBCU division, said those tactics are also effective because they build awareness without a hard sell. "And this subtlety is paying off in organic buzz,” he said in a statement. He added that 21% of respondents said brands don’t take the right steps to build community.

Mercedes-Benz got a 52% lift among women and 36% improvement among men with its in-house designed Style Furniture Collection, as well as its food and music programs. Those include a "Mixed Tape," downloadable, bimonthly compilation of world music, and an epicurean program, "On the Road," involving a picnic menu developed by chef Daniel Humm of Eleven Madison Park and NoMad. That effort promoted 2013 SL Roadster. Humm is a James Beard award winner, which furthers MB’s tie-in with the yearly James Beard Foundation award ceremony.

Toyota improved from 23rd to 21st place among all brands with women and from 18th to 16th place with men, per the Q3 study. Helping with the lift was a sponsorship of NBC's "Toyota Concert Series" on Today, which included a partnership with Pandora. Also boosting the brand was a 10-part video series called "Becoming Fearless" with the Huffington Post, based on Arianna Huffington’s book with that theme. The automaker also re-upped for the fourth year its road-trip Web series touting the Venza crossover via a partnership with MSN. The show has foodie voyager Andrew Zimmern touring the south in a Venza, visiting local -- and usually offbeat -- restaurants.

Chevrolet went to baseball (it has "official vehicle" status with MLB) with a cause-marketing program called “Diamonds and Dreams,” dangling a refurbished baseball field for communities. A Country Music Awards promotion let people vie for a chance to write a brand fan anthem. Chevy's position in the BPI rose 12% (from 29 to 26) in the third quarter.

To spotlight the Acura ILX, Honda’s luxury car brand partnered with indie rock band Metric with five exclusive concerts for Acura owners and Metric fans. The firm said Acura rose 80% among females because of that.