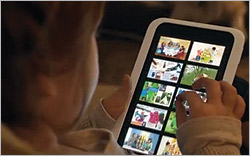 Barnes & Noble brings the holiday wish list into the modern age via a new television commercial that shows off the “Catalog” and “Scrapbooking” features (which enable people to save and organize images in one place to easily share with others) of its Nook HD and HD-plus tablets.

The television commercial, which will begin running this week, shows a mother and her daughter perusing electronic catalogs on their Nook HD. When the mother leaves, the girl continues, saving different pages and images in a single file that she calls “Dear Santa.” After she completes her list, she leaves the Nook in the family’s mailbox addressed to the North Pole as a way of sharing her wish list with Santa.

“If you think about the way people –- especially women -- shop catalogs, all the stuff they collect and the mountains of paper that can be organized, it’s a whole new world for people to go through catalogs and collect imagery,” Glenn Kaplan, creative director at Barnes & Noble, tells Marketing Daily, adding that the feature is much like Pinterest in its manner of visually organizing information for recall at a later time. “It’s absolutely a very similar mindset, and it resonates brilliantly with what people are doing on Pinterest. This is the way people are discovering content, organizing their content and sharing their content.”

Along with “Share” -- a pre-Black Friday television commercial that showed a family passing a Nook among each other with different user profiles set up for each member -- the new commercial (which will run in concert with “Share”) is meant to position the Nook HD and HD-plus as the “ideal tablet for families,” Kaplan says.

“With ‘Share,’ we’re saying that with profiles, everyone gets to have their own unique device,” he says. “The scrapbooking, which is a unique build in feature for Nook HD and HD-plus, solves a lot of problems and creates a lot of value for families.”

Since first creating advertising for the Nook in April 2011 (when it was positioned as the ultimate e-reader), Barnes & Noble has subtly evolved the product to show off more tablet features. That evolution, however, does not mean the Nook has lost sight of its primary purpose or core audience, Kaplan says.

“Our strong suit and our mission is reading, but the world of tablets affords a wider array of choices,” Kaplan says. “Our way into the world of multimedia is through people’s interest in reading.”

Both “Share” and the “Dear Santa” commercial, which were created by advertising agency Mullen and directed by Todd Field of Smuggler, will run throughout the holidays on broadcast and cable networks, on programming such as “The Voice,” “X-Factor,” “Dancing with the Stars,” “Grey’s Anatomy,” “The Mindy Project,” “The Good Wife,” “Survivor,” “Nashville,” and several others. The company estimates the commercials will receive 1.2 billion impressions nationally throughout the campaign. Not surprisingly, the “Dear Santa” spot will also run in digital channels that also appeal to heavy Pinterest users.