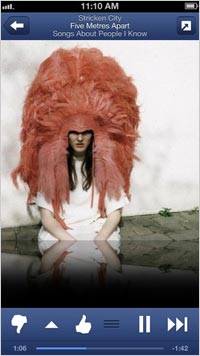 Since reports that Apple was planning to launch its own streaming music service began circulating in September, Pandora has faced increased investor uncertainty. Concerns about the company’s ability to compete directly with the tech behemoth have pushed down Pandora’s stock more than 25%.

For the current quarter, Pandora projected revenue in the range of $120 million to $123 million, with an expected loss of 6 cents to 9 cents per share on an adjusted basis. Analysts had anticipated fourth-quarter earnings of 1 cent a share on revenue of $130 million.

During the company’s earnings conference call, Pandora CEO Joe Kennedy said the disappointing fourth-quarter forecast reflects concerns among its advertisers about the fiscal cliff and related economic uncertainty heading into 2013. Pandora’s fiscal fourth quarter is unusual in that it ends January 31, rather than at the end of the calendar year.

The company’s results for its fiscal third quarter ending Oct. 31 were better. Pandora reported a profit of one cent per share on sales of $120 million, up 60% from the year-earlier period.

Analysts on average had forecast earnings per share of a penny on revenue of $117 million. Excluding stock-based compensation of $7.1 million, Pandora would have had earnings of 5 cents a share.

The company said total listener hours -- a key audience metric -- grew 67% to 3.5 billion during the third quarter, compared to 2.1 billion for the third quarter of fiscal 2012. It recently reported that listener hours in October alone grew 65% to 1.2 billion. Active listeners In October increased 47% to 59 million, down slightly from 49% growth in September.

Advertising, which generates the bulk of Pandora’s revenue, rose 60% to $106 million in the quarter, while subscription sales contributed $13.7 million, up 52% from a year ago. Building up advertising on the mobile side has been a key focus this year for Pandora, which gets the vast majority of its usage through mobile devices.

During the quarter, Kennedy said the company increased mobile monetization at “record levels” and increased total mobile revenue by 112% to $74 million. Enhancing its mobile presence, Pandora launched upgraded versions of its iOS and Android apps in October.

In addition to the looming threat of Apple, Pandora also faces growing costs for acquiring music rights. It is among companies lobbying Congress to pass the Internet Radio Fairness Act, legislation that would reduce royalties paid by Web radio services. Higher user growth for Pandora has also meant higher royalty costs each time a user plays a song.

For the full year, Pandora forecasts revenue in the range of $422 million to $425, down from the range of $425 million and $432 million it had projected in the second quarter. The net loss per share is projected at 9 cents to 12 cents, up four to eight cents.

Pandora shares were down more than 17% in after-hours trading to $7.80 following the company’s release of third-quarter results and its fourth-quarter and full-year outlook.