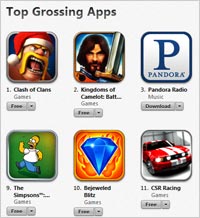 Talk about your "top 1%." According to analyst Canalys, half of all app revenue generated by both Apple iOS and Google Android in the first 20 days of November went to only 25 developers, virtually all game makers. Companies such as Zynga, Electronic Arts, Disney, Kabam, Rovio, Glu, Gameloft and TeamLava all were atop the list of big earners in this list of 25 developers who among them generated $60 million in estimated direct paid and in-app purchase revenue in 20 days. Canalys used its App Interrogator online analytics tool to survey app sales activity worldwide.

The top revenue earners are dominated by games publishers, and in fact only Internet radio provider Pandora is among the top 25.

The recipe for success among these big money makers in apps is having a portfolio of offerings, says Canalys VP and Principal Analyst Chris Jones. “Part of the story here is that successful game developers almost invariably have multiple titles generating revenue,” he says. Zynga, for instance, has 15 titles among the top 300-grossing iPhone games and nine in Google Play. Even Rovio's major franchise Angry Birds has multiple variants.

Canalys says that the dominance of these game makers in the two major app stores presents greater challenges to non-gaming apps. Discoverability is tougher when nearly half of the top 300 paid apps in iOS and 116 in Google Play are games.