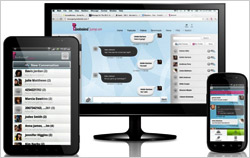 Mobile ad network Jumptap and WPP’s 24/7 Media have teamed up to provide a service that lets advertisers reach audiences across the desktop and mobile devices through a single buy.

The companies said their unified offering would help reduce inefficiencies associated with running cross-platform campaigns. New features, like frequency capping and retargeting, will ensure users aren’t overexposed to the same ad on multiple devices. The effort also promises consolidated reporting and analytics across the PC and mobile devices.

Jumptap and 24/7 are currently testing the cross-platform ad service with a small group of beta advertisers and plan a full rollout in the first quarter of 2013.

“The transition from online to mobile is not simple. Many advertisers face unneeded layers of complexity and difficulty in delivering, targeting and measuring ads,” said Adam Soroca, chief product officer at Jumptap.

With their platforms, respectively, reaching about 85% of U.S. online and mobile audiences, the companies would be able to offer broad scale for campaigns across devices. By joining forces, they also want to better compete with Google, which allows marketers to make display ad buys across the desktop Web and mobile through its AdWords system and the DoubleClick Exchange.

The move also comes as Jumptap builds toward an IPO in 2013. When the company raised a venture round of $27 million in July, for a total to date of $121 million, it said it hoped to go public within a year, while continuing to enhance its product and technology development. Last month, Jumptap announced a separate partnership with third-party data provider BlueKai to offer improved ad targeting through its network.