Near Entry-Luxury Segment A No-Man's Land? 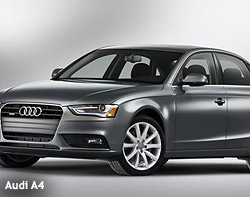 Once there was a strict line of demarcation between luxury and mass-market cars. Now mass-market brands are like the Vandals at the gates of Rome, winning owners and intenders from near entry-luxury nameplates like Chrysler 300, Acura TL, Audi A4, and BMW 328i. While the larger and more premium luxury cars still retain their share because of prestige and perceived quality, the edge of luxury is losing cache as mass-market vehicles get more and more premium features, while retaining a value image. All of which is turning the mass and luxury dichotomy into a continuum; the walls are down.

Marketing firm GfK took a look at this issue and found the near entry-luxury grey space wanting in its Automotive Intentions and Purchases study. The firm finds that both consideration and loyalty are working against entry luxury vehicles as consumers, including affluent ones, are happy to buy vehicles with better gas mileage and better value than premium cars.

For example, loyalty among people looking to replace their near entry-luxury vehicles has dropped by nearly five percentage points in the past five years, while the number of people who have moved up to the middle of the prestige market -- where vehicles like the BMW-5 and Mercedes-Benz E-class, Lexus GS and Audi A6 compete -- has remained constant. Also, fewer people who consider or even intend to buy a near-luxury sedan end up buying one (5% versus 4.1%), while a much larger percentage of people who intend to buy a smaller mid-sized car (7.1%) end up buying one (17.5%).

Additionally, among people who are considering a near-entry luxury sedan, 78% also consider a range of non-luxury sedans. Thus, far fewer are thinking of moving up to mid-luxury than moving down to the mass market for the principal reason that consumers see the non-luxury world as the practical and responsible choice, per GfK. Near-luxury vehicles do, however, score well on qualities associated with adventure and passion. Consumers view both near-entry luxury and non-luxury as "trusted."

The study also finds that mid-size (particularly larger mid-size) sedans are approaching near-luxury in qualities that had been the sole domain of the high-end market: quick acceleration, fit and finish, advanced features and attractive styling, and fun to drive. While non-luxury sedans win hands down for fuel efficiency and value parameters, it is non-rational values that attract consumers to near-luxury cars -- but those values are losing sway with consumers of all income levels now.

The firm argues that what near-entry luxury cars have to do to win equivocating owners and intenders by focusing on luxury values instead of trying to "out mass" mass: quality, trust, prestige qualities that luxury owns as key reasons to purchase, per the study.