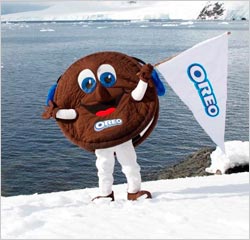 One hundred one years to the day after the first explorers -- led by Roald Amundsen -- reached the South Pole (Dec. 14, 1911), Oreo will do the same.

Today, the iconic cookie brand is capping off a year’s worth of promotions marking its 100th anniversary on March 6, 2012, with its most elaborate effort by far: It’s delivering 5,000 Oreos to the scientists at Palmer Station in Antarctica -- along with a donated, solar-powered “Penguin Cam.”

The camera, being delivered on an expedition ship with the help of the philanthropy arm of adventure-travel company Abercrombie & Kent, will enable scientists and (through live-streaming on the Internet) the world at large to observe penguins in their natural habitat.

The gifts will be presented by the “Oreo Man” character (sporting ear muffs) and accepted on behalf of Antarctica’s “residents” by James McClintock, endowed professor of polar and marine biology at the University of Alabama at Birmingham.

McClintock, a marine chemical ecologist and invertebrate zoologist who has been a member of 14 research expeditions to Antarctica since 1983, will be conducting interviews with press via Skype. Oreo (with public relations agency Weber Shandwick) is also, of course, publicizing the event through its social media assets and press outreach galore.

For Oreo, now part of Mondelez International, the sub-zero extravaganza represents the literal fulfillment of its declared birthday mission to help “everyone, everywhere” -- those on all seven continents -- “celebrate the kid inside” by enjoying Oreos, says Oreo senior associate brand manager Danielle Brown.

The scientists are “excited” at the prospect of being able to learn more about penguin behavior, and share that learning with others, through the donated camera, Brown tells Marketing Daily. The plan calls for having the camera up and running in January, she reports.

Oreo, not surprisingly, isn’t revealing how much the camera and the event as a whole are costing the brand. “The monetary investment isn’t as important as the legacy that the Penguin Cam will leave, providing students and adults around the world for years to come the chance to experience special moments for years to come as they watch Antarctica’s true residents -- the penguins -- in their natural habitat,” says Brown.

McClintock, in a release about the event, noted that “having a chance to enjoy an Oreo cookie and a glass of milk is like having a little piece of home here in the station.” (No details provided as to how accessible milk is on the Antarctic Peninsula.)

Oreo’s other anniversary initiatives included its much-covered “Daily Twist” campaign, in which the brand released a different image variation of an Oreo every day for 100 days, each designed to represent a current event or holiday/celebration.

The brand continues to encourage its Facebook fans around the world (its Facebook page currently shows nearly 30.8 million “likes”) to share a photo, story or video about their Oreo “inner kid” moments in a gallery dedicated to such moments. So far this year, fans have shared more than 1 million such moments, according to the brand.

Abercrombie & Kent Philanthropy describes itself as “dedicated to preserving the natural habitats, protecting wildlife and promoting the welfare of indigenous communities throughout the world.”